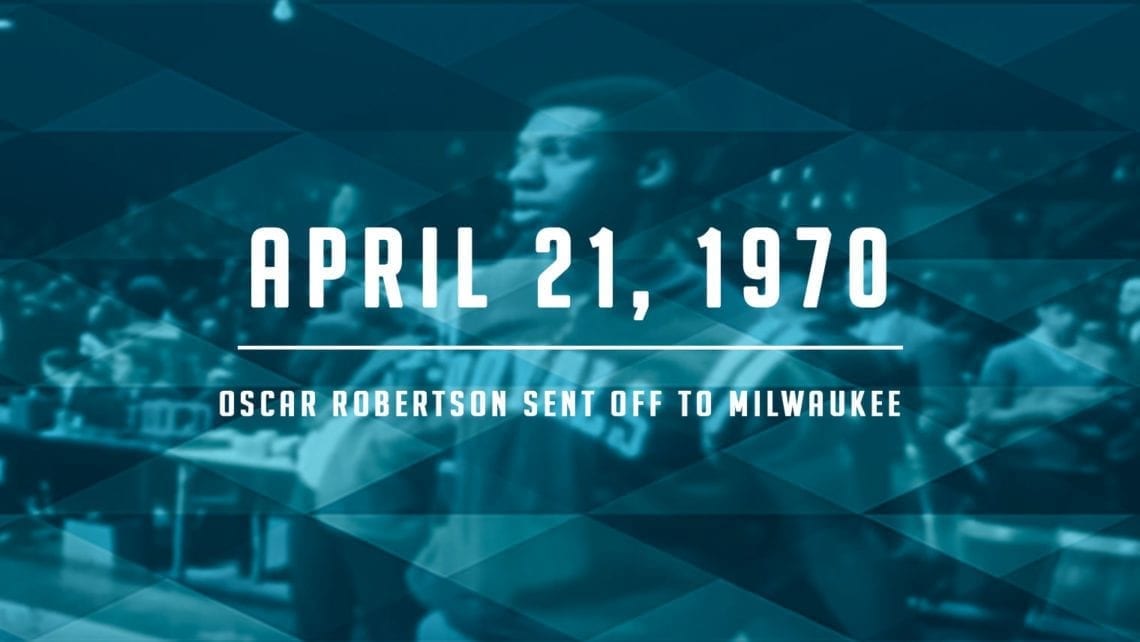 On this day 49 years ago, the Cincinnati Royals shipped Oscar Robertson to the Milwaukee Bucks.

The Royals received forward Charlie Paulk and guard Flynn Robinson in the deal for the Big O, who was 31 at the time of the trade.

Robertson had played all 10 of his NBA seasons with Cincinnati up to that point, and his streak of playing in the city was even longer considering his college days at the University of Cincinnati. The Indianapolis native would spend the final four years of his NBA journey in Milwaukee.

The Big O was coming off yet another All-Star year, making his 10 for 10 in All-Star Games for his career at the time. He scored 25.3 points per game, adding 8.1 assists per outing to boot. His Royals finished 36-46, placing fifth in the Eastern Division and missing the postseason.

There were rifts between Robertson and the Royals, and the writing was on the wall for an exit, according to The New York Times.

“Robertson said sometime ago he had been approached by the Royals’ management and told he would be traded because Cincinnati could not afford to pay him what it was expected he would be asking after the current season,” The Times reported. “He denied that he had actively sought a trade. There were differences between the star guard and the new coach, Bob Cousy, in recent months. Some grew out of a difference of opinion over style of play. Robertson sat out 12 games of the season because of a reported groin injury. There were reports at the time that Cousy felt the injury was not so serious as it was made out to be.”

In NBA.com’s legend profile of Robertson, the trade is attributed to a feud.

“Theories attempting to explain the trade abounded,” it reads. “Many observers believed it was Cousy’s jealousy of Robertson that led to the trade. The Big O had just broken many of Cousy’s records and Cincinnati was suddenly too small for the both of them. ‘Whatever his reasons were,’ Robinson later said, ‘I think he was wrong and I’ll never forget it.’ Fans up and down the Ohio River mourned.”

Robinson was originally a second-round pick for the Royals in the 1965 NBA Draft (18th overall) and had spent portions of his career in Cincinnati previously, playing for the Royals in the 1966-67 season and the start of the 1967-68 campaign. Cincinnati dealt him to Chicago early in that season. When he was sent back to Cincinnati, it was already the third trade in his first five NBA seasons. He would be traded twice more before the end of his NBA career in 1973.

At 28, the guard was coming off the best season of his life, averaging a career-high 21.8 points per contest, and chipped in 5.5 assists each night, too. He played well enough to earn his first and only All-Star Game appearance.

Paulk did not play the 1969-70 season because of army service. It would have been the second season in the NBA. Milwaukee selected the Northeastern State-product seventh overall in the 1969 NBA Draft, but he was still getting his feet under him in his rookie year, posting 3.0 points in 12.8 minutes per game.

Milwaukee made this move with a makeup trip to the NBA Finals and more in mind.

“Robertson will fit in just perfectly with Lew Alcindor,” Milwaukee head coach Larry Costello told The New York Times. “He’s going to take some of the pressure off from Lew. We think we’re improving our team and that’s what we’re out to do. Oscar has always been a leader and we expect him to be a leader on our team.”

In his first season in Milwaukee, Robertson played 81 games at age 32, averaged nearly 20 points and better than eight assists each night, and shot 51.1 percent from the field. Milwaukee went 66-16, the league’s best record in the regular season, claiming the top spot in Midwest Division. The Bucks defeated the San Francisco Warriors, 4-1, in the Western Conference Semifinals, then conquered the Los Angeles Lakers in the Western Conference Finals, 4-1. Then, in sweeping fashion, the Bucks mauled the Washington Bullets, 4-0, in the 1971 NBA Finals to secure the franchise’s first and only championship.

The Royals finished 33-49 with their new-look squad, finishing third in the Central Division and outside of the playoff picture. Robinson didn’t produce like he did in Milwaukee, putting up 13.3 points and 1.9 dimes per contest. Paulk had the best season of his career, but he remained a role player, scoring 9.2 points and hauling in 4.7 rebounds per game.