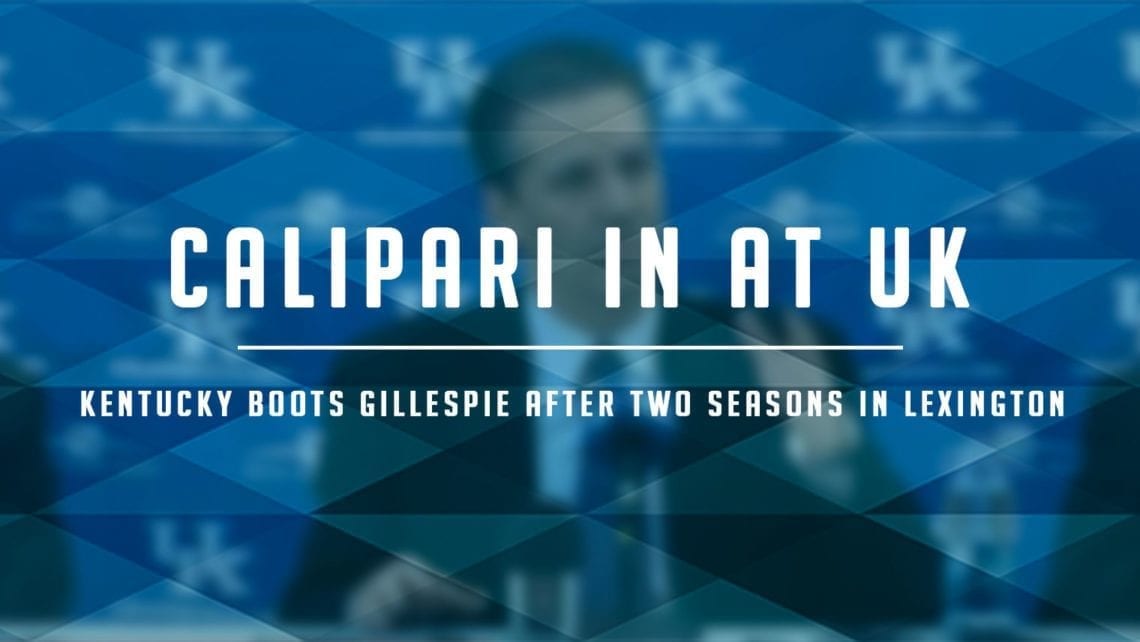 by Justin Meyer
in College, Insider

The year is 2009. Barack Obama’s presidency is young, the Warriors are just another NBA team, and I was entering high school. A lot has changed since then, including Kentucky basketball. Let’s take a look at one of the most important coaching changes in college hoops and what people were saying at the time:

“There is a clear gap in how rules and responsibilities overseeing the program are viewed. It is a gap I do not believe can be solved by just winning games.” – Kentucky athletic director Mitch Barnhart

“Impatient for a winner, Kentucky fired Billy Gillespie as coach Friday after only two years, too many losses and too little appreciation for all the things that come with running college basketball’s all-time winningest program.” – Will Graves, The Associated Press

“I blame the screening committee who hired Billy Gillespie, because he can only be who he is, and that’s what he was at Texas A&M. They thought they were going to get Billy Donovan to leave Florida. It wasn’t going to happen, so now they end up with Billy Gillespie, so blame the screening committee, whoever hired him, because he can only be who he is. He wins 12 games in that conference a year ago with (Ramel) Bradley and (Joe) Crawford when everybody thought they were horrible. No, he got it done. Okay, this year, they get to the NIT, it’s not there. But this whole team is coming back, and year three, that’s when you make the move. My first year at Notre Dame, we’re 6-20. We’re horrible. Two years later, we become a real powerhouse, and I think there’s where this Kentucky program was headed. So for Billy, I think it was unfair for him to be let go after two years because that team’s coming back, and whoever takes it over, they’re going to win and probably get to the Sweet 16 next year, because that team’s that good.” – Digger Phelps

“Barnhart said rebuilding years are expected when a new coach is hired. The trouble were ‘philosophical differences’ between the university and Gillespie on the role the school’s coach plays in the fabric of a fan base that refers to itself as Big Blue Nation …

Beyond the money, however, was Gillespie’s seeming inability to ingratiate himself to the fans. He could be gruff with the media and stubbornly refused to change his coaching strategy even as the program suffered embarrassing losses to schools like Gardner-Webb and VMI.

The team continued to hold draining two-hour practices on game day, a move Gillespie said was designed to toughen the players up but sometimes left them spent at the end of close contests.” – Graves, The Associated Press

“After over a day of deliberation, John Calipari is headed to Kentucky.

“‘It was a wild and hectic day and I really and truly believe that John didn’t decide until right at the end, late this afternoon,’ Memphis athletic director R.C Johnson told Katz Tuesday night. ‘We talked throughout the day. We’ve got a great thing going here. So I’m disappointed.’

“A dream I had since we brought our team down here, I believe it was 1992. We’d won the Alaska Shootout, came down here to play, and I could not believe the environment. At that point I said, I’d love to coach there some day.” – John Calipari at his introductory press conference

“It’s also possible some of his latest recruits will follow him to Lexington.

One of those is DeMarcus Cousins, a 6-foot-11 center from Mobile, Ala., who is ranked No. 4 on ESPNU’s top 100. He verbally committed to Memphis earlier this month, but because he has not signed a national letter of intent, he can change his mind and pick another school.

Cousins, in Miami for the McDonald’s All-American game, said during a Tuesday news conference that the Wildcats would be an option if Calipari took the job.

‘I would consider Kentucky,’ Cousins said. ‘I would open it all the way back up.’” – ESPN.com

“Calipari’s up-tempo style of play has become especially appealing with our dribbling adolescents in the clutches of the undisciplined (to put it diplomatically) A.A.U. culture. He also plays the role of the unwashed underdog better than Brando …

Can it really be that simple? Aren’t there dozens of Type A personalities roaming the nation, well-dressed men who can charm the tattoo off a triceps? Who promise plenty of touches (code word for shots), television appearances and an accelerated pathway to the pros?

In such a frantic, byzantine world, is it possible to recruit as relentlessly and as successfully as Calipari has, according to the letter of the N.C.A.A. law?” – Harvey Araton, New York Times

“What does this hire by Kentucky … do? It makes the Wildcat program nationally relevant again. Instantly. With a single stroke of the pen … every major recruit from 9th to 11th grade (and several in the 12th) who has visions of wearing a hideous suit to meet David Stern on Draft Day suddenly has Kentucky back on their radar screens … With arguably the strongest recruiter this side of Roy Williams and Ben Howland vacuuming up numerous kids with serious dreams of the L, and the commitment to resources that a school like UK brings to basketball, is there any doubt whatsoever that The Squid will have the Cats hunting for Final Fours again very soon? The pressure to win and win big will be gargantuan, but Calipari is one of the few coaches with enough ego to handle it.” – rtmsf on Rush The Court

“Hoping to make a big splash after Gillespie’s tenure, Kentucky is expected to go deep into its pockets to land one of the nation’s most high-profile coaches.

The deal would make Calipari the highest-paid coach in the country, eclipsing the $3.5 million average salary of Florida’s Billy Donovan and dwarf those of Calipari’s predecessors Rick Pitino, Tubby Smith and Gillespie …

The salary nearly triples the $1.6 million salary of Kentucky football coach Rich Brooks, a rarity in a conference where football reigns.” – The Associated Press

Texas Tech hired Gillespie in 2011 to replace Pat Knight. In one season, Gillespie led the Red Raiders to an 8-23 (1-17) record. Before the start of the 2012-13 campaign, he was accused of player mistreatment, including forcing players to play through injury and keeping scholarships up in the air. Some serious health issues surfaced shortly after, and Gillespie resigned before the start of the season. He has spent the last four seasons coaching at Ranger College, a junior college in Ranger, Texas.