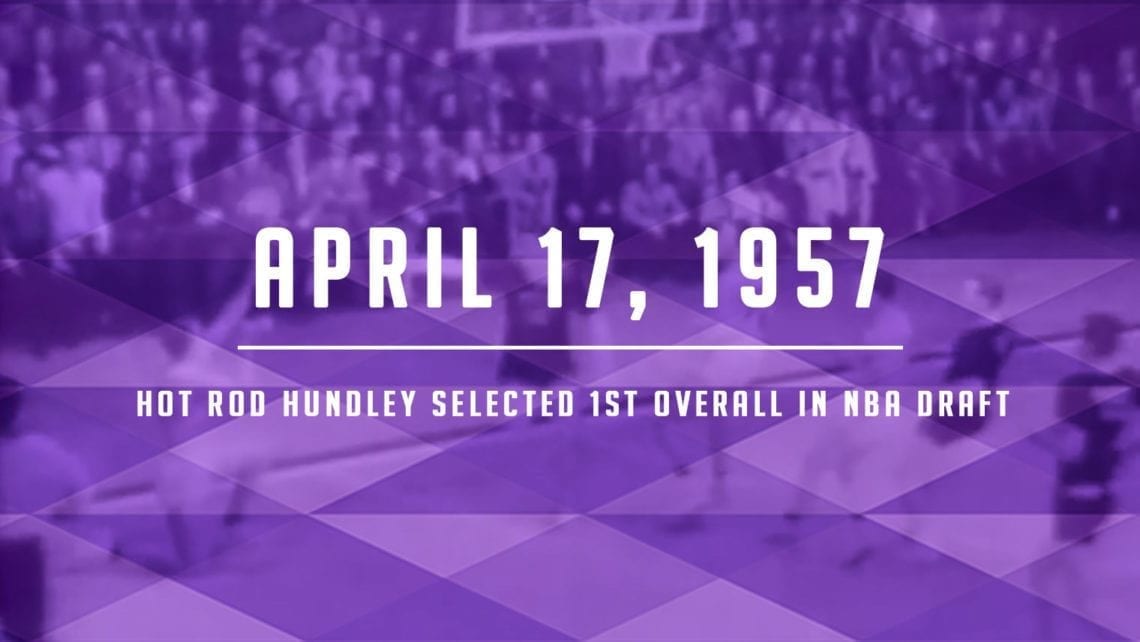 On this day 62 years ago, the Cincinnati Royals selected Rodney Clark “Hot Rod” Hundley with the first overall pick in the 1957 NBA Draft.

The guard attended and played for West Virginia, his home state’s flagship university, in his college days. In his three seasons from 1954-57, Hundley helped lead the Mountaineers to three consecutive seasons with at least a share of the regular season conference championship and three-straight Southern Conference Tournament titles. He dominated on the offensive end, scoring 23.7, 26.6 and 23.1 points per game in his three years, respectively, and he averaged a double-double as a junior and senior. Hundley was a three-time All-SoCon player and two-time All-American, and was named Player of the Year for the 1956-57 campaign. He became the fourth player to amass at least 2,000 points in an NCAA career.

In his first three professional seasons, the Lakers played in Minnesota. In 1960, Hundley packed up with the rest of the organization and moved to Los Angeles, spending the final half of his career in southern California.

Hundley made an instant impact, featuring in 65 games his rookie season, contributing 7.0 points per outing in 17.8 minutes. His playing time gradually increased, and by his third year, Hundley was named an All-Star, posting 12.8 points, 5.3 rebounds and 4.6 assists per contest in 31.2 minutes. He followed it up with another All-Star showing, scoring 11.0 points and dishing 4.4 dimes per game in the 1960-61 season.

The Lakers finished last in the league by 14 games in Hundley’s first year, ending the year 19-53. But the addition of Elgin Baylor in the offseason gave the team new life in the 1958-59 campaign, doing enough to get to the playoffs, then going on a run all the way to the 1959 NBA Finals. But once there, the Boston Celtics made quick work of their challengers, sweeping the Lakers for the title.

In 1960, the Minnesota Lakers took off during a blizzard and crashed in a cornfield in Iowa. A report from the Minneapolis Star Tribune said he was the first to speak after all plane passengers processed they had survived, yelling “I live to love again!”

Hundley and his team would lose in consecutive Western Division Finals during his All-Star seasons, both times to the St. Louis Hawks in seven games. In 1962, the Lakers won their division in the regular season and returned to the Finals, edging the Detroit Pistons in six games in the Western Division Finals. But again, the Celtics stood in their way, and Boston celebrated as champions after winning in seven games.

In his final season in 1963, the Lakers completed an equally-dominant regular season and exacted revenge on the Hawks for previous defeats, eliminating St. Louis in the Western Division Finals in seven games for a shot at double redemption against Boston in the NBA Finals. But for the second year in a row, the Celtics crushed LA’s heart, taking the title in six games.

Hundley retired from basketball in 1963 and finished his NBA career with 3,625 total points. For as well as he played, he became particularly known for what he did after hanging them up.

The former guard took to the broadcast booth, becoming a staple of New Orleans and Utah Jazz seasons, doing color for 3,051 games over more than three decades.

Before getting his start with the Jazz, Hundley worked alongside Chick Hearn, the play-by-play announcer for the Lakers, for four years to learn the ins and outs of the booth. Next, he got a gig doing color for the Phoenix Suns, spending four more years there. In 1974, he was hired as the first voice of the New Orleans Jazz, the latest expansion team in the league. When the franchise moved to Salt Lake City in 1979, he tagged along.

After 43 years of calling games, Hundley retired from broadcasting in 2009 at the age of 74. He continued to act as a substitute when needed for KCAL’s TV broadcast of Lakers games.