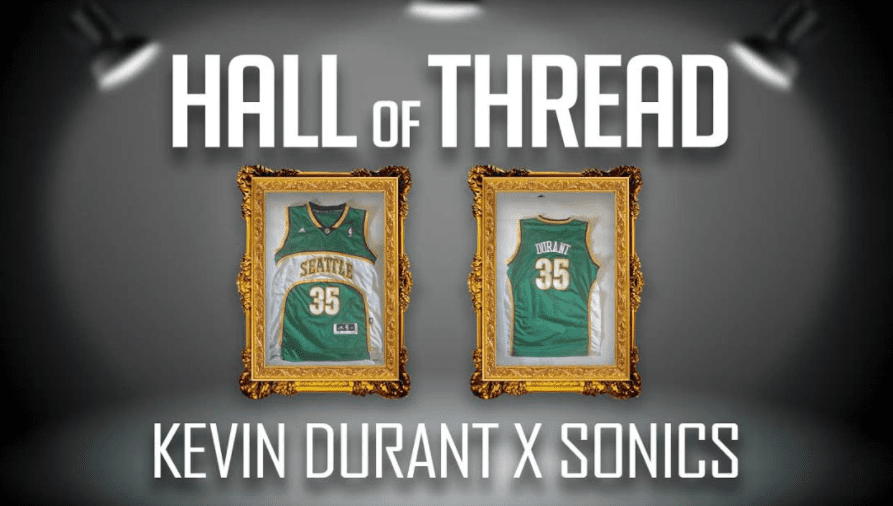 by Logan Meyer
in Gear, NBA

Editor’s Note: Welcome to Hall of Thread. Logan Meyer has collected sports jerseys since middle school and has more than 250 to his name. Thrift stores across the world, trades and scouring online deals have helped him build his jersey empire, and in this series, he will explain some of his most prized basketball jerseys, how he got them, background on the player and teams and more. With a collection like his, you’re bound to find something unique – a Kevin Durant Seattle SuperSonics fit.

From the Cincinnati Royals to the Vancouver Grizzlies, the NBA has seen its fair share of tearful franchise goodbyes. However, none is likely more well-recognized than the relocation of the Seattle SuperSonics.

After their founding in 1967, the SuperSonics played more than four decades in the league. Thanks to financial concerns and the inability to upgrade KeyArena, the former home of the SuperSonics, the team packed up shop in 2008 and relocated its entire operation to Oklahoma City. The move saw star players switching cities, the creation of the Thunder, and a transition from the former green and yellow team colorways of Seattle to the blue and orange of OKC.

The SuperSonics fielded numerous All-Stars and top players during their run in the NBA, including Gary Payton, Shawn Kemp, Ray Allen, and Spencer Haywood. But in Seattle’s final draft as an NBA franchise, it hit on its biggest jackpot. Unfortunately, it happened a bit too late.

Found within the aisles of a Red Racks thrift store in Kansas City, Missouri, was the jersey of Seattle’s 2007 lottery selection, Kevin Durant. Picked at No. 2 overall, Durant certainly had high expectations coming out of Texas and has only exceeded them throughout his career. In arguably one of the all-time “what could have been” moments, the disheartening part for Seattle is that only one season of Durant’s tenure in the league ever occurred within the Emerald City.

The combination of Durant’s profile as one of the NBA’s top scorers and players overall for the last decade and his incredibly short one-year stint in Seattle is what makes this jersey so uniquely rare. Considering he only played that singular season with the SuperSonics, this top is one of the few that I can confidently identify the exact year of the jersey’s creation.

The jersey itself features its own unique design decisions. The team name across the front is slightly curved at an angle that replicates the slope of the team’s very recognizable white stripe that bisects the green trim of the jersey in two. Additionally, the number of the front is much lower on the jersey than is typical in the NBA.

The SuperSonics have formed a sort of cult following in the jersey world thanks to their long-running current nonexistence and their creative style and colors. To find one in such pristine condition 12 years after its creation for only $7.99 plus tax, with such a marquee athlete on the back who played a very short tenure makes this top very possibly my rarest thrift discovery and one I’m particularly fond of.

The Dirt on Kevin Durant

Thanks to a growth spurt heading into his senior season of high school hoops, the already immensely talented Kevin Durant was able to reach new heights. At 6-foot-7, Durant tore apart his opposition that season en route to being named the McDonald’s All-American Game MVP.

As the No. 2 ranked recruit out of high school, only behind once-perceived generational talent Greg Oden, Durant committed to play for Texas, which was where his legend truly began.

Although he only played one season for the Longhorns, he made his legacy at the program very apparent. After growing two more inches, the now extremely lengthy Durant crushed all notions of what a freshman in college basketball is capable of. A matchup nightmare, Durant averaged a 25.8-11.1-1.3 points, rebounds, and assists split during his singular year in Austin. Although his Longhorns team failed to live up to its NCAA Tournament expectations that year after a second-round upset defeat to USC, Durant still ended up with plenty of silverware. He was not only Big 12 Player of the Year and a consensus First-Team All-American, but also won the John R. Wooden Award, Naismith College Player of the Year Award and an outrageous eight other national player of the year awards in 2007.

Transitioning to the NBA, Kevin Durant once again ended up behind Oden, being selected at No. 2 overall. However, this would be the final time in his career that Durant was ever in Oden’s shadow. In his only season in Seattle prior to their relocation, Durant earned the NBA Rookie of the Year Award thanks in part to joining LeBron James and Carmelo Anthony as the only teenagers in NBA history to average more than 20 points per game for a season.

The move to Oklahoma City in 2008 only led to greater performances out of Durant. He grew two more inches in his first few NBA seasons, and the range and smoothness in his shot were and still are unmatched by possibly any other player of his almost 7-foot stature. In the 2009-10 season, his second with OKC, Durant really began to take over the league. Averaging better than 30 points per game that year, Durant earned his first of many NBA All-Star appearances to go along with his first of four NBA individual scoring titles.

Flash forward a decade, and Durant still maintains his role as one of the NBA’s premier talents. With nine more All-Star game appearances, two NBA Championships, two NBA Finals MVPs, an NBA MVP Award, and two Olympic Gold Medals all within the last 10 years, Durant has very likely solidified himself as a future Hall-of-Famer.

Durant plays with an uncanny combination of size and scoring that provokes comparisons between himself and a mix of Tracy McGrady and Dirk Nowitzki, two of the NBA’s greatest players. So rather disappointingly for Seattle, a Kevin Durant SuperSonics jersey has hung in my closet for longer than in their own locker room.