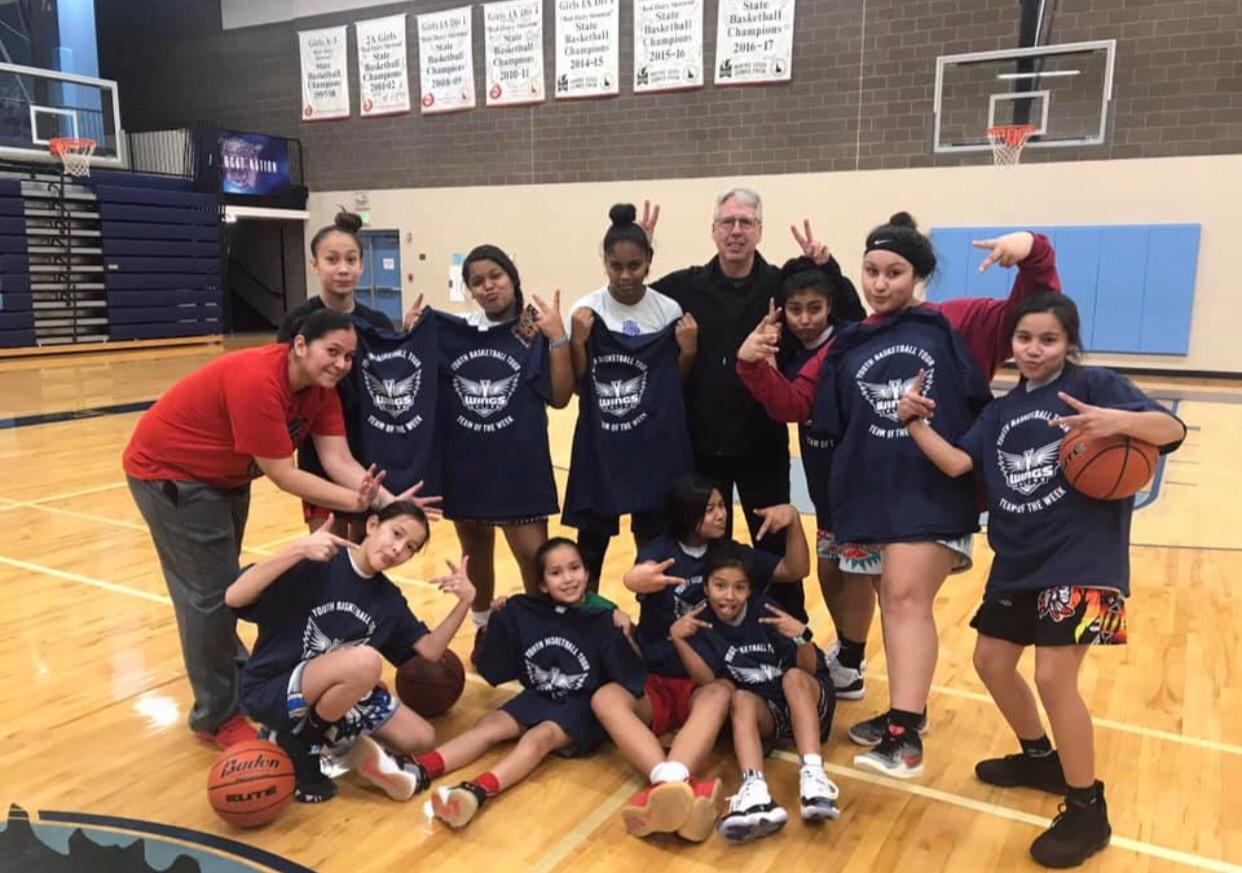 Brian Agler and some of the campers having fun at last year's first annual Holiday Hoops Basketball Clinic in Lapwai, Idaho. Photo courtesy of Rika Powaukee.

On Dec. 21 and 22, this Friday and Saturday, Dallas Wings head coach Brian Agler will be in Central Idaho making a difference.

This will be the second year in a row for the Holiday Hoops Basketball Clinic, set for 10 a.m. to 3 p.m. at Lapwai High School on the Nez Perce Reservation. The Nez Perce tribe is the oldest inhabitant of the Western Hemisphere, with more than 16,000 years under its belt, but in recent times, area has been ravaged by alcoholism, drug addiction and violence, with women in particular as targets through sex trafficking and other crime.

That’s part of what makes this clinic so important.

“Missing and murdered women is an epidemic throughout the country right now, and (Native women are) the most likely to go missing and murdered,” said Rika Powaukee, the camp’s director who grew up on the Nez Perce Reservation and played basketball at Lapwai High School. “Not only is it just the Native American women who have this problem, but there’s also problems like this within the (Nez Perce) County, in Lewiston and Clarkston as well. Meth is a big problem, and also alcoholism. I wanted to do something about that.”

Agler doesn’t have any personal ties to the area; he is originally from Ohio and has coached in various spots across the country, but Idaho is not one of them. But Lapwai, Idaho, is where he hosts an annual clinic, free of charge, open to any seventh and eighth grade girls who can get there.

But that’s not all: attendees will also receive swag bags, including donated Adidas gear, snacks, a catered lunch, a ball to borrow for the event and important talks from Agler and other prominent figures in the surrounding community who have positive stories and lessons to share.

“With this camp also highlighting drugs and alcohol prevention, we want the kids to maintain their safety,” Powaukee said. “Having self-esteem and self-worth and them knowing people really do care, that’s a lot. It’s good for them to continue having that positive influence in knowing that somebody is literally coming from Texas. It’s Christmas break, and Christmas time is a tough time of the year, and Brian is taking his own time from Christmas that he would be normally staying with his family out here to shed some positive energy to them, and also the other volunteers as well.”

Agler and Powaukee met through mutual friends in Los Angeles a few years ago when he was the head coach of the Los Angeles Sparks. Powaukee told him about where she was from and how her area needed an injection of positivity. That’s when the gears started turning.

“At this point in my career, I wanted to learn more about people that live in our country, do outreach to help teach the game of basketball, help teach some of the traits that help individuals become successful, and help the WNBA become visible to areas that we do not have a presence,” Agler explained. “Lapwai has a great tradition of passion for the game of basketball, especially at the high school level.”

Championship commemorations litter the halls of Lapwai High School, and there’s great pride in the area’s hoops. Powaukee won a state title her senior year as her team went undefeated, one of many great basketball seasons on the boys and girls’ sides that the city has seen.

“There’s a championship culture at Lapwai High School in basketball,” she said. “If you come into the high school, championship plaques are everywhere.”

Striving for excellence and a better future are core to the ideals behind the clinic, but the socialization and bringing together of people from different races, religions, hometowns and all other aspects of diversity are just as valuable.

The reservation is home to non-Natives as well, Powaukee said, and racial divides have been an issue in the area for some time. Powaukee remembers hearing racist taunts yelled at basketball games growing up, and she said she hears the same verbal assaults nowadays, too, which she called “disrespectful to the sport and its players.”

She hopes that by having an open clinic to kids from a mix of backgrounds, it will help solve that problem in future generations.

“The people here, they don’t really hang out together,” she explained. “You’ll be sitting in the stands at these basketball games, and they just hurl these insults, and it’s never healthy, and it’s never addressed or acknowledged by the state. But it’s something that needs to heal. The kids coming and doing this annual event will hopefully heal some of that and the historical trauma.”

Last year, the event attracted about 45 kids, and this time around, its organizers are expecting roughly 55. The goal is for the clinic to continue to grow to the point where kids from all around Central Idaho and even Eastern Washington are coming to learn from Agler and the other speakers.

As the second iteration of the clinic quickly approaches, Powaukee said seeing how the girls react to their growth as players is her favorite aspect of the camp, knowing what basketball did for her coming from the same area.

Help Find A Missing Member of the Nez Perce Tribe

Shaulina Bulltail was last seen in 2017. She is 28 years old, 5-foot-10, 150 pounds. She has tattoos: a feather on her right thigh and writing on her left shoulder blade that reads, “Nehemiah.” She might be homeless in Seattle in the SoDo District.

If you have any information about her or her whereabouts, please call 1-800-CALL-FBI.