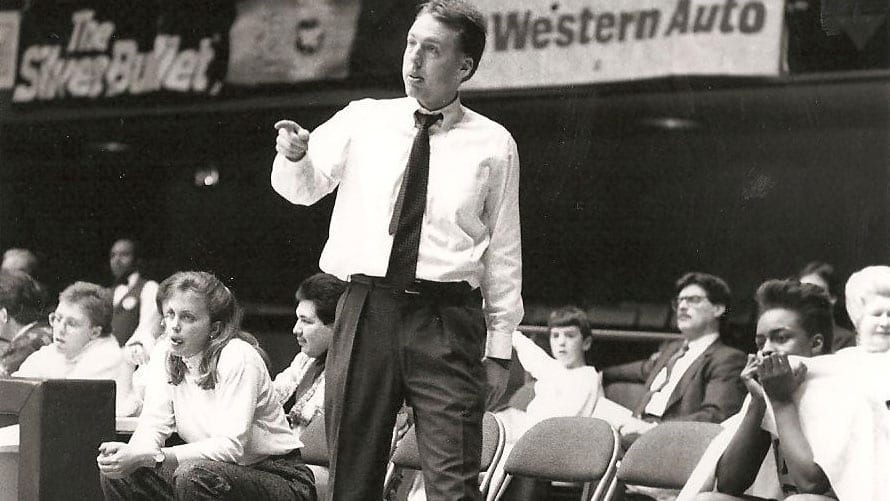 Editor’s Note: Brian Agler is entering his first season as head coach of the Dallas Wings. He has been coaching in the WNBA for 20 years, previously at the helm of the Minnesota Lynx, Seattle Storm and Los Angeles Sparks and as an assistant with the Phoenix Mercury and San Antonio Silver Stars. He has won two WNBA Championships (2010 with Seattle, 2016 with Los Angeles), the first coach to do so with two different teams, and stands as one of the winningest coaches in WNBA history. This is the first installment of our series on him.

When Brian Agler committed to Wittenberg and Bobby Hamilton, he thought he knew what he was getting himself in to.

But when he arrived on campus in 1976, head coach Hamilton was nowhere to be found, and the point guard was stuck with an unknown.

Agler was an Ohio product, born in Wilmington, a small town halfway between Columbus and Cincinnati, before moving to Prospect when his father became principal of Radnor High School originally, then Buckeye Valley High School following a consolidation.

When he selected Wittenberg, a Division III school in Springfield, Ohio, at the end of his time at Elgin High School, Agler expected to play for Bobby Hamilton, who had been the head coach since 1970. But when Navy came calling, Hamilton hightailed it to Division I.

“It goes to show you that when you go to make a decision, a big decision like choosing a place to continue your education or continue your athletic career, that you should look at it from different perspectives,” Agler said. “Would you like to be at this place if the head coach wasn’t there? Are there more factors into why I’m going than just because of the head coach? It was for me.”

Wittenberg elevated Larry Hunter from assistant to head coach, and that previous unknown had Agler experiencing the early stages of what would become a legendary 13 years at Wittenberg and a long, successful career for the first-time head coach.

By the time Hunter left Wittenberg for Ohio University in 1989, he had won a national championship, notched four Final Fours and won more than 80 percent of his games. He was in Athens until 2001, and later served as Western Carolina’s head coach from 2005-18.

He made an impression on the player, and some of his philosophies found their way into Agler’s when he began his coaching career later down the road.

“Extremely focused guy,” Agler said of Hunter. “We never had goals of winning a national championship. Our goals were always to win the conference tournament, because that was an automatic bid to the NCAA Tournament. When I say focused, that’s what I mean. The focus wasn’t on the ultimate goal – the national championship – it was always the first step to get there.”

It was incredible for Agler, but it did set a false precedent for the freshman. In the season before he joined the team, Wittenberg had gone to the Final Four, so with a national title in his pocket and knowing the program had gone to two-straight national semifinals, he assumed it would be a regular occurrence.

“Obviously a tremendous experience, but it didn’t put things in proper perspective,” he said. “After we did that my freshman year, I’m thinking, ‘Okay, we’re probably going to do this two or three more times.’ It’s not quite that easy.”

Agler and the Tigers would return to the Final Four his senior year in 1980 with a team he said may have been more talented than the one that won it all. But it further showed Agler what is necessary for serious success.

He didn’t begin coaching immediately after college, but it wouldn’t take long. Agler crossed the pond to play a season of professional basketball in the U.K., then came back for his first coaching position: assistant men’s coach at Muhlenberg College, gained through a connection from Wittenberg.

Agler wasn’t around long, though, spending a season there before his head coach from high school, Larry Gipson, reached out with a new opportunity. Gipson had moved west and served as head men’s coach at Northeastern Oklahoma A&M (NEO), a junior college in Miami, Oklahoma, and was looking for some help on his staff.

So, in his third year out of college, Agler traveled across the country and opened up more possibilities than he even knew.

In the spring of 1983, not even a calendar year after coming to Oklahoma, the NEO athletic director asked Agler if he would be interested in coaching women’s basketball, something he hadn’t done before. The head coach had just retired, and NEO needed a replacement.

“I was working on my master’s degree,” Agler said, remembering back to his thought process. “If I become a head coach, I might become full-time faculty sooner. Women’s basketball in Oklahoma was really popular, it was followed. So, I decided to do that. Like anything else, you’re competitive, your network builds and you have a chance to be a head coach, run your own program. I stuck with that.”

He said the experience coaching at the junior college level is likely what best prepared him for the WNBA. The resources were limited, and most tasks fell on Agler’s shoulders, not to mention improvements in his driving skills.

“The staff was myself and a couple volunteers, and the assistant men’s coach, Randy Gipson, was sort of helping both,” Agler explained. “I had to do everything. You prepare for practice, you run practice. You’re the recruiting coordinator. You’re the director of operations. You’re running study table. You’re bus driver. You’re doing everything. It really makes you grow up in a hurry.”

Agler gained notice for his efforts, and in 1988, he was offered and accepted the UMKC job, making the leap to Division I.

UMKC started its program in 1980 as an NAIA member. In 1987, it moved up to NCAA Division I, and one year later was looking for a new coach to continue the transition.

Agler had to follow in Nancy Norman’s footsteps, who had built a nationally-relevant program at the NAIA level and was the first and only head coach in program history, while handling a difficult step up in competition. He said the hardest part wasn’t handling the team or Xs and Os, but filling out a full schedule.

He had to make a Division I schedule as an independent, and opposition couldn’t count the Kangaroos as Division I opponents on their own calendar. Compromises had to be made.

“We played so many road games. I probably learned to take the answer, ‘No,’ and learn how to accept that more than any other time in my life,” Agler said with a laugh.

The coach would stay at UMKC until 1993, amassing an 85-24 record. His 1991-92 team won a UMKC Division I record 24 games and secured wins against five Big 8 foes: Oklahoma State, Missouri, Kansas State, Iowa State and Baylor. Agler was inducted into the UMKC Hall of Fame in 2013.

He accepted the head coaching position at Kansas State in 1993, altering the adage to beat and join the Big 8 in what would become a career-changing time in Manhattan. That and more will be covered in the second part of our coverage of Agler.