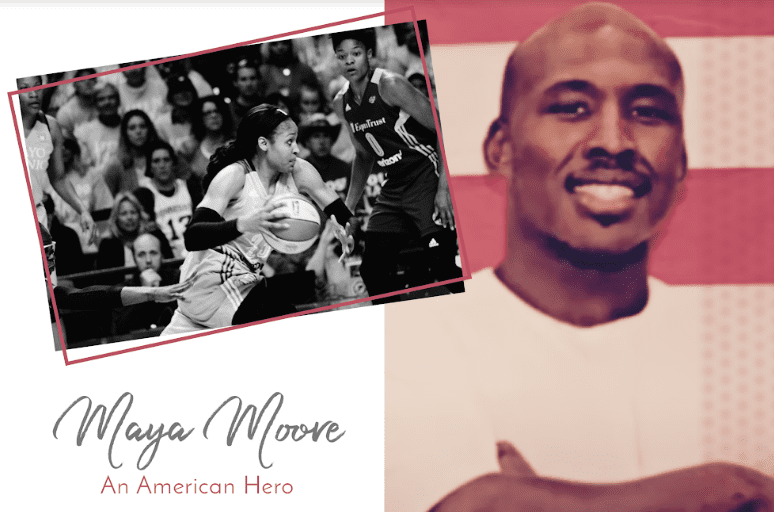 Maya Moore Is an American Hero

In 2007, Maya Moore met Jonathan Irons. When the two first connected, Irons was an inmate on a 50-year sentence for a 1997 burglary and assault, and that remained the same until this week.

On Wednesday, Irons was released after serving more than 20 years for a crime he didn’t commit.

Moore and Irons met through the player’s family’s work in prison ministry, and the two grew close. Moore learned the prisoner’s story, and she began working to free her innocent friend. She skipped the 2019 WNBA season to pursue justice for Irons, and she chose the same route for the 2020 campaign months before coronavirus confused the schedule.

“I feel like I can live now,” Irons told KMOV4. “I’m free, I’m blessed, I just want to live my life worthy of God’s help and influence.”

Maya Moore is an American hero.

As protests and calls for reforms to eliminate institutionalized and systemic racism in this country have reached a fever pitch in the last month, several players in the WNBA and other sports, such as Renee Montgomery and Natasha Cloud, have opted out of playing this year to pursue social justice causes. I’m sure these are genuine acts, and people with platforms are necessary to bring about change. Their work and sacrifices are real and appreciated.

But Moore did it before it was cool.

Maya Moore was a superstar in college at UConn, and she continued that as a pro in the WNBA. After going No. 1 overall in the 2011 WNBA Draft, Moore helped the Minnesota Lynx win four championships, reach six WNBA Finals and appear in the postseason in every opportunity. She won the league’s 2014 MVP award, was a six-time WNBA All-Star, and currently holds career averages of 18.4 points, 5.9 rebounds, 3.3 assists and 1.7 steals per game.

Heading into the 2019 campaign, Moore was coming off two all-star seasons and was primed to continue as one of the best players in the world. But instead of staying on the court, Moore left it behind to pursue something more important.

This is a professional athlete in the prime of her career. Moore had to put countless hours of work and focus into her skills and mindset to get to that point. It takes years of tremendous dedication to be a pro athlete, let alone to be near the top of your sport. And she voluntarily forfeited it when no one else was.

Then, she did it again in January, opting out of the 2020 WNBA season and the Tokyo Olympics, giving up a chance at a third gold medal.

Now, in large part due to her work, Jonathan Irons is a free man, and another spotlight has been shined on the inadequacies of the American criminal justice system. In short, the world is a better place.

This is sacrifice, something this country used to herald as the ultimate. The Greatest Generation earned that name through incredible sacrifice. Martin Luther King, Jr. is a national hero for the sacrifices he made for what was right. The many women who marched and fought for decades for suffrage that eventually led to roughly half of Americans gaining the ability to vote in 1920 sacrificed a great deal to bring deserved rights to the population.

On Jan. 20, 1961, President John F. Kennedy spoke to the nation in his inaugural address. During his speech, he said the famous words, “And so, my fellow Americans: ask not what your country can do for you – ask what you can do for your country.”

The sacrifice and work Moore has done, specifically in the last couple of years, is an answer to Kennedy’s call. Of course, what she did was for Irons in particular, but it’s bigger than that. Take a step back and see the situation for what it is: an American sacrificing a great deal to make this country a better place.

And she isn’t done, though a short reprieve might be in order.

“My decision to take another year was bigger than this case,” Moore said to the Associated Press in March after Irons’ convictions were overturned. “But obviously this case was in the forefront of my mind. I’m looking forward when this is done to finally getting some rest and time with my family.”

When duty called, Maya Moore responded, and this story should be at the top of every national news outlet. This is sacrifice. This is change. This is an American hero in action.