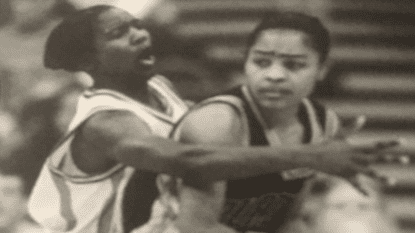 by Justin Meyer
in Legends

Editor’s note: This is Part II of a look into the life of an individual who was born and raised in women’s basketball. We encourage you to visit Part I of the Tomeka Brown story, on her roots in the game and growth from a young gym rat to WNBA draftee.

After being selected No. 55 overall in the 2002 WNBA Draft, Brown didn’t crack the Orlando Miracle roster. The former Ohio State player decided to step away from the game, and for a few years, left basketball out of her regular life. It would come up occasionally, and she would make appearances here and there, but nothing that put a demand on her schedule.

“For a long time, I fought it,” she said. “I didn’t really want to get into coaching, because I knew how much time it took, and once I got out of basketball, I wanted to give myself a break from it totally.”

But there was only so long she could go before crawling right back.

“When there’s something that you love and have a passion for, you can run from it, but eventually it’s going to get you,” Brown explained. “I would try to sporadically show up or just do special appearances, and I would feel so good. That’s my sanctuary, that’s what makes me happy, so I would always chase that feeling.”

When being away from the game was too much, Brown went to her high school alma mater and asked her former coach, Gary Tucker, how she could help. He put her to work, and Brown began her coaching career as an assistant at Marion Franklin High School in Columbus, Ohio.

She has maintained her footprint in basketball since, serving as a high school head coach, assistant coach and collegiate assistant before stepping away from coaching, but not hoops, within the last year. Brown is still around the sport, but in different ways.

“I don’t want to physically be on a sideline coaching,” Brown said. “I’m into the development of the whole individual. Still do some training and that type of thing, but I’m more on the business administrative end of things. I still can do it, I love it, but I don’t think that’s in my near future.”

Brown has worked for Columbus Public Schools and Columbus Recreation Parks, always trying to be “a blessing to some individuals just like someone was to me.” One of her main outlets for that now is the Girls Leadership and Basketball Academy (GLBA), a “year-round skills training program that develops players of all ages and skill levels … designed to improve confidence on and off the court by developing individual leadership and basketball skills,” according to the organization’s Facebook page.

The former Buckeye uses the GLBA as another way to reach young people.

“I think basketball is a huge tool,” Brown explained. “I have a personal template of what I’ve been through to navigate my success: memories, resources, connections, networks, and they were huge. Not everybody is afforded those same opportunities. But if we can scale those things down and provide those and be a blessing to people, I think that’s huge.”

She works on GLBA with some of her past teammates at Ohio State, among others, and utilize that chemistry to help their girls be the best they can.

“A lot of my teammates from Ohio State – Tanya McClure, D’wan Shackleford, Courtney Coleman – we all still have individual companies of expertise, so when we come together, it’s sweet,” Brown said. “You have a lot of experience, and you have great business minds that come together. We want to train people up to be their best.”

Otherwise, Brown focuses on her work as a creative, attending meetings and pushing through patents. Her current goals are to begin work on a Ph.D. and to obtain her ministry license. Most importantly, she puts her energy into being a mother to her son, Tyson Whitehead. The 4-year-old is already an eager athlete like his mother, dabbling in soccer, t-ball, flag football, and of course, basketball.

At this point, Brown knows basketball isn’t going anywhere for her. Her role in the game might change, but her involvement and love for it won’t.

“It has had a profound influence in my life. You can run from something you’re great at, but not for so long,” Brown said. “I have a gift with not only sports, but motivating individuals, and that’s what I think was missing. When I’m around, people see my heart, my passion, my desire for the game, let alone my experience. That’s what takes me back to the game.

“I always love the game, but I wanted to be able to do it in balance, so that was it for me. Doing things and balancing, making sure I stay true to myself while I’m in the sport. Sometimes that would have be choose to be away for a while. Even though I was away from the game, I was still loving the game, creating things outside of the game for the game. During that time, I was making myself better for once I got back into the sport.”

A Message From Retired WashU Coach Mark Edwards on COVID-19