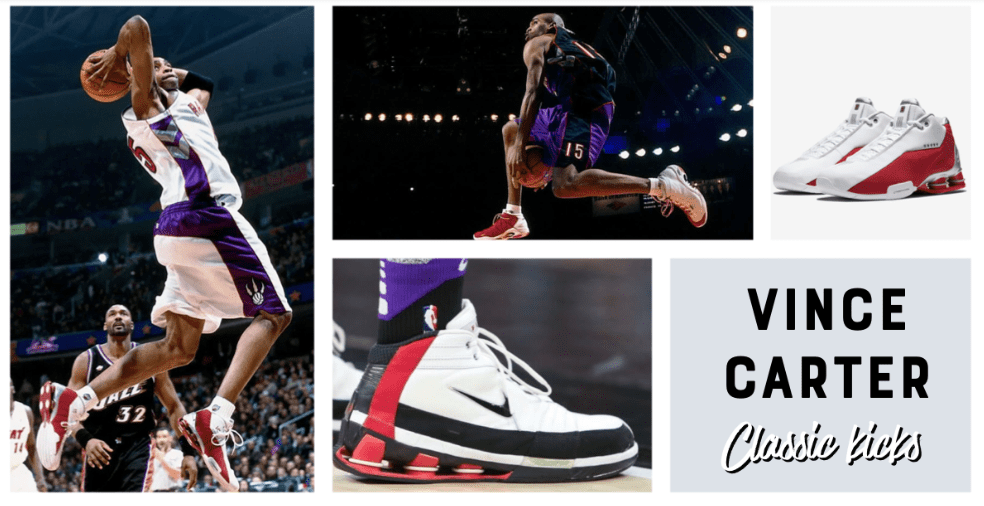 Last month, Vince Carter announced the end of his 22-year professional basketball career, ending one of the most storied hoops journeys of the new millennium. Carter helped bring about a new era of basketball into the NBA and beyond with his high-flying, above-the-rim play style and trademark headband.

Carter came up during the rise of basketball shoes entering popular media, and he played a role. Before his first NBA season, Carter signed a deal with Puma for the “Puma Vinsanity” for $50 million over 10 years. He broke that agreement very early, though, citing that they made his feet hurt. Carter went to wearing various shoes during the 1999-2000 season. But before the 2000 Sydney Olympics, Carter signed with Nike as a signature athlete and giving him his first signature shoe, a Nike Shox BB4 PE, angling the release around the international competition that was set to prominently feature Carter.

“We’re using Vince more than any other Nike basketball player that has had their own shoe, with the exception of Michael Jordan,” Nike basketball spokesman Eric Oberman told ESPN’s Darren Rovell in 2008. “Not only does he demand a signature shoe, but we’re ready to build a franchise around him.”

Now 12 years later, Carter has hung those signature shoes up. Let’s remember Carter’s incredible career and impact on the game through a few of the unforgettable moments he provided us and the sneakers that accompanied them.

The NBA hadn’t done a dunk contest since 1997 after it lost a lot of steam. Top players lost interest in it, and its quality decayed over time.

“The greatest skywalkers weren’t even competing,” New York Times NBA columnist Mike Wise said to ESPN. “It had gone from Dr. J to Michael to Spud Webb to Dee Brown’s flying dunk, and at this point it was just played out. It’s done.

“There’s no playground trick that’s going to revive this thing.”

The NBA brought back the event in 2000, and Carter demolished the show. His performance was massive in reinstating public trust in the Slam Dunk Contest and bringing the attitude back to the competition, as explained in this collective account of that event.

Carter brought out a reverse 360 windmill dunk that made Shaq do this:

Later, the honey dipper dunk had Shaq looking like this:

That pretty much encapsulates America’s reaction to Carter’s gravity-defying night.

Carter wore AND1 Tai Chi shoes while he dazzled viewers, the red-and-white sneaker on full display for everyone to see.

You only have to move a few months forward for one of the other iconic moments Carter provided us.

Carter led Team USA with 14.8 points per game at the 2000 Sydney Olympics, leading the Americans to a perfect 8-0 record and another gold medal. Unfortunately for 7-foot-2 Frederic Weis, those two facts are remembered much less than what Carter did to him.

With Team USA leading 69-54 early in the second half, a loose ball popped out to Carter near the three-point line after what looked like a transition opportunity for France. Poor Frederic Weis stood between Carter and the hoop, but just literally, not figuratively. Figuratively, nothing stood between Carter and the hoop, and thus “Le Dunk de la Mort,” or The Dunk of Death, was born.

France won silver in Syndey, and Weis saw a good deal of success during his professional career in Europe that spanned from 1995 to 2011, including a French League title and French Cup championship in 2000 and French League All-Star selections from 1997 to 2000. Although he never played in the NBA, the New York Knicks picked him in the first round of the 1999 draft. But his victimization via Carter in Sydney has overshadowed much of his positive accomplishments, and he gets it.

“[Carter] deserves to make history,” Weis told Michael Wallace and Rob Peterson of ESPN in 2015. “Sadly for me, I was on the video, too. I learned people can fly.”

When Carter put Weis on a poster, he was wearing his signature shoe, the Nike Shox BB4s.

That was 20 years ago and the Nike Shox BB4 shoes are back on the market. When they first hit shelves again, they had a retail tag around $160. You can cop a pair from Eastbay around $30 off the original price.

On Nov. 7, 2005, Vince Carter and the New Jersey Nets took on the Miami Heat in Miami. The game featured a handful of dazzling plays and plenty of drama, but the prime highlight came from Carter elevating over Alonzo Mourning.

Richard Jefferson tried to score at the rim early in the third quarter of the game, but Mourning denied him. The ball bounced out to the perimeter, where Carter scooped it, promptly slipped it behind his back to avoid an oncoming Jason Williams, and went straight to the hole with Mourning right in his sights.

Mourning couldn’t stop this one.

Carter sent Mourning back to Georgetown as he bulldozed him out of the way to shake the backboard. Even other Heat players had to recognize the moment’s greatness.

“That’s top 10 right there in the whole history of the NBA,” Dwayne Wade said after the game with a laugh.

Mourning and the Heat would get the last laugh by the end of the season, winning the franchise’s first championship months later. But in that season’s earliest days, Carter owned the court, and he did so in his Nike Shox VC 5s.

Vince Carter debuted the Nike Shox BB4 in Sydney at the 2000 Olympics, and after what he did there, particularly with the Dunk of Death, it helped launch the shoe into prominence.

“The success of the dunk started the legend of the shoes,” Carter said in a Nike News release in 2018. “But I myself went to another level with them, too. I became a star player in the BB4.”

The shoe was first released to the public Nov. 15, 2000, with Eastbay using a full page in its holiday catalog to show off the men’s and women’s versions of the Nike Shox BB4.

While the BB4 took off with Carter, the Shox concept had been around for some time. In 1984, the idea first came about, and the design shows it. It was a time of great intrigue into space, and the rocket-like concept made the shoe look like its wearer was preparing to launch into the stratosphere. Nike’s Eric Avar has explained how the space age influenced all parts of the shoe.

“The upper was inspired from some space suits at the time,” Avar said in the Nike News release. “We kept it simple and understated, but modern with a slight iridescence and reflectivity.”

Carter wore the BB4 with custom VC15 PE stitching in the 2000-01 NBA season, including in the 2001 NBA Playoffs where he had a 50-point game in Game 3 of the Eastern Conference Semifinals to help his Toronto Raptors overcome Allen Iverson and the Philadelphia 76ers, 102-78.

The superstar brought the shoes back in 2018 and wore them for most of the 2018-19 campaign while playing for the Atlanta Hawks, the eighth and final team of his career. He continued that into the 2019-20 season, and he had on a black, grey and red pair for the last game of his NBA tenure.