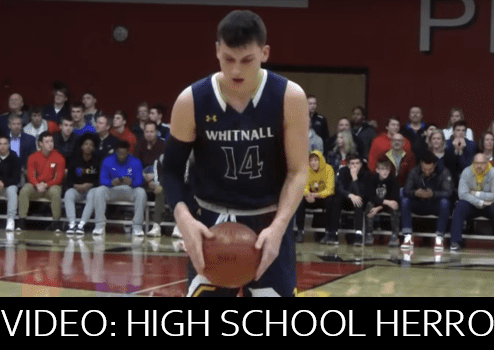 Tyler Herro is playing well for the Miami Heat now, but in 2018, he was playing for the Woodland Conference Championship in high school.

Tyler Herro is in the midst of his NBA rookie season after the Miami Heat selected him with the No. 13 overall pick in the 2019 NBA Draft. The guard is averaging 13.8 points and 3.9 rebounds with a 37.5 percent clip from beyond the arc through 25 games, carving out an early role for himself within the Southeast Division leaders.

But a couple years ago, before Herro joined the professional ranks or stepped onto the collegiate court for Kentucky, he was in high school making opposing student sections feel silly.

In 2018, Herro and Whitnall High School traveled to Pewaukee High School in the Woodland Conference Championship Game in his home state of Wisconsin. Pewaukee’s students certainly knew who their team was up against and did whatever they could to get in Herro’s head. You can take a guess as to whether or not it worked.

This is not a new video, but it does a great job of showing what a cold-blooded killer Herro was during his high school days. He scored 39 points in the game, and not very many of them were easy buckets. Pull up triples, hard drives to the lane and tightly-contested mid-range jumpers made up most of his production, and it’s quite apparent that an NBA-level talent is on the floor. Add in the taunts from the Pewaukee students, and you have a classic high-intensity basketball atmosphere, with all the drama and intimacy you could ask for.

The Spin on Tyler Herro

Herro was a four-star recruit and the No. 37 recruit in the Class of 2018 and the top player in Wisconsin, according to 247Sports Composite rankings. The Milwaukee-product committed to Kentucky to join the second-ranked class in the country, alongside four five-stars recruits, and made an immediate impact in college.

In his one collegiate campaign, Herro averaged 14.0 points, 4.5 rebounds and 2.5 assists per contest, starting in all 37 of Kentucky’s games. He was the team’s second-leading scorer and an integral part of the Wildcats’ 30-7 (15-3) record, good for a second-place finish in the SEC. Kentucky was awarded the No. 2 seed in the Midwest Region, and Herro was a major reason why the team made it to the program’s seventh Elite Eight since 2010.