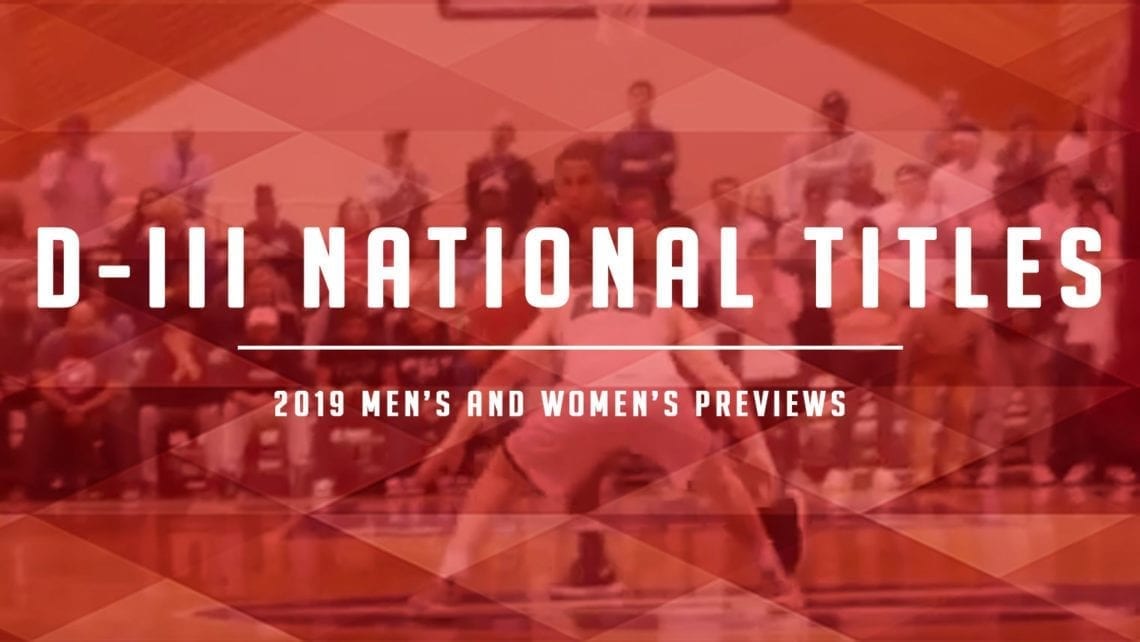 by Justin Meyer
in College, Insider

While Division-I is raging through its conference tournaments and gearing up for the NCAA Tournament, March Madness has been underway elsewhere for weeks.

The men’s and women’s Division-III national championships are tonight, at 7 p.m. and 7:30 p.m., respectively, to determine its 2019 kings and queens.

The truth is you won’t find the same level of play at that level as you will at Division-I. If you need the court to host elite athleticism and players with professional aspirations, then Division-III isn’t for you. If all you require is impassioned basketball with players who are there for the love of the game and nothing more, then continue reading.

No players who will step on the floor in Fort Wayne and Salem tonight has an athletic scholarship. Each and every one is there because they love basketball. And now everything they’ve poured their hearts into for the last year comes down to this: one game that will bring a validating conclusion or an unsatisfied emptiness. If you love watching heated competition, you won’t find many better ones than this.

It can be difficult to watch Division-III ball. You won’t often find it on television, and streams can be up and down. This is your annual chance to watch the best of the best battle it out in front of you from the comfort of your home.

If your interest has been piqued but you don’t know what to watch for, don’t worry, we’ve got you covered. Here’s the background behind these two season culminations:

7:30 p.m. at the Cregger Center in Salem, Virginia (streaming live for free on NCAA.com)

In the national semifinals, Thomas More defeated Scranton, 69-56, a typical scoreline for it this postseason. The Saints dispatched their earlier opponents strongly, too, winning every game by at least eight and have won their first five tournament games by an average margin of 15.2 points. Thomas More has one game away from completing a perfect season, something it did in 2015 and 2016 when it won back-to-back national titles, the program’s first and second ever in its history. Coincidentally, today marks exactly one year since Thomas More suffered its last loss: a 66-48 defeat in the 2018 National Semifinals to eventual-national champion Amherst. This is Thomas More’s third-ever national championship appearance, and the Saints are looking to remain perfect in the season’s biggest game to add a third national title to their program’s history.

Bowdoin is seeking redemption in its second-straight national championship game after falling 65-45 in the 2018 title to Amherst. The Polar Bears took care of St. Thomas (Minn.), 71-60, on Thursday for the right to make amends, and also cruised through its tournament opponents, winning their last five games by an average of 21.4 points. Bowdoin’s sole loss on the season was Feb. 24 to Tufts in the NESCAC Finals, 75-69, one of the NCAA Tournament’s top seeds. This is Bowdoin’s third-ever national championship appearance, and it is aiming for its first-ever national championship.

Make no mistake: these are two of this season’s titans. There’s no small dog here. It’s giant versus giant.

Senior guard Madison Temple headlines Thomas More. She is averaging 23.7 points per game, fifth in Division-III and tops for her high-octane offensive squad. Temple is shooting 61.6 percent from the field and 44.6 from behind the arc, establishing herself as one of the best scorers in the entire country. Part of what makes her so special is her ability to get to the line. The 6-foot guard shoots 6.3 free throws per contest, and she shoots at an 89.7 clip from the charity stripe. But she doesn’t only score. Temple is one of Thomas More’s best rebounders and dishes nearly six assists every game. She also takes care of the ball and ensures the opposition doesn’t, with a 2.4 assist to turnover ratio and 2.8 steals per outing. Temple is extremely well rounded and a load for any team to handle.

Bowdoin is the deeper team, with nine players averaging double-digit minutes, and senior guard Abby Kelly and junior forward Maddie Hasson are the focal points. Kelly has grown into a 1,000-point scorer and important shot-taker for the Polar Bears while Hasson does the dirty work inside. The post player is adding 14.7 points and more than six rebounds per game to complement Kelly’s 15 points to help round out the attack. The duo combined for 46 in the National Semifinals game against St. Thomas, and Thomas More will work hard to keep at least one of them in check tonight.

Swarthmore has had some close calls in its path to the national championship game, narrowly escaping Randolph-Macon 58-57 in the third round and Nichols 69-65 in the quarterfinals. The Garnet defeats Christopher Newport 70-63 in the National Semifinals, holding their opponent to 32.3 percent from the field and keeping the Captains at arms length throughout the game. Swarthmore has not lost since Jan. 19, entering this matchup on a 15-game winning streak. This is the program’s first-ever appearance in the national championship, and it is seeking its first national championship in program history.

Wisconsin-Oshkosh entered the NCAA Tournament with some questions, losing by 20 in the WIAC Tournament Semifinals to Wisconsin-Stevens Point right before the postseason, the team’s second loss in three games to close the season before tournament play. But the Titans have bounced back and have fought their way to their second-straight national championship game. The team blew through Wheaton College (Ill.) in the National Semifinal, 104-85, further making it clear that the skid before the tournament is well behind it. Last year, the Titans couldn’t complete the journey, falling 78-72 to Nebraska Wesleyan for the season’s greatest prize. Now, they’re back and focused on finishing the job. This is the program’s second-ever appearance in the national championship, and it is also seeking its first-ever national championship.

NABC named Swarthmore’s senior guard Cam Wiley to its All-America First Team, and for good reason. Wiley is putting up 15 points and four assists per game, both tops for his team, and established himself as one of the premier players at the Division-III level. While he might be the biggest name on the squad, the Garnet is well balanced, with four players scoring in double figures and an average of 16 assists per game as a team. Swarthmore locks is down defensively, though, only giving up 62.8 points per contest, the seventh-fewest in Division-III.

NABC also named Wisconsin-Oshkosh’s senior guard Ben Boots to its All-American First Team. The Kimberly, Wisconsin, product is putting up 15.8 points per outing, a team-leading mark, but he’s only one of several high-octane scorers in the lineup. Three of the other four Titans starters are averaging at least 14 points, perhaps bringing an even more balanced attack than Swarthmore. This team’s core is the exact same as the one that played in this same game last season, so you expect an experienced and poised showing from the Titans.