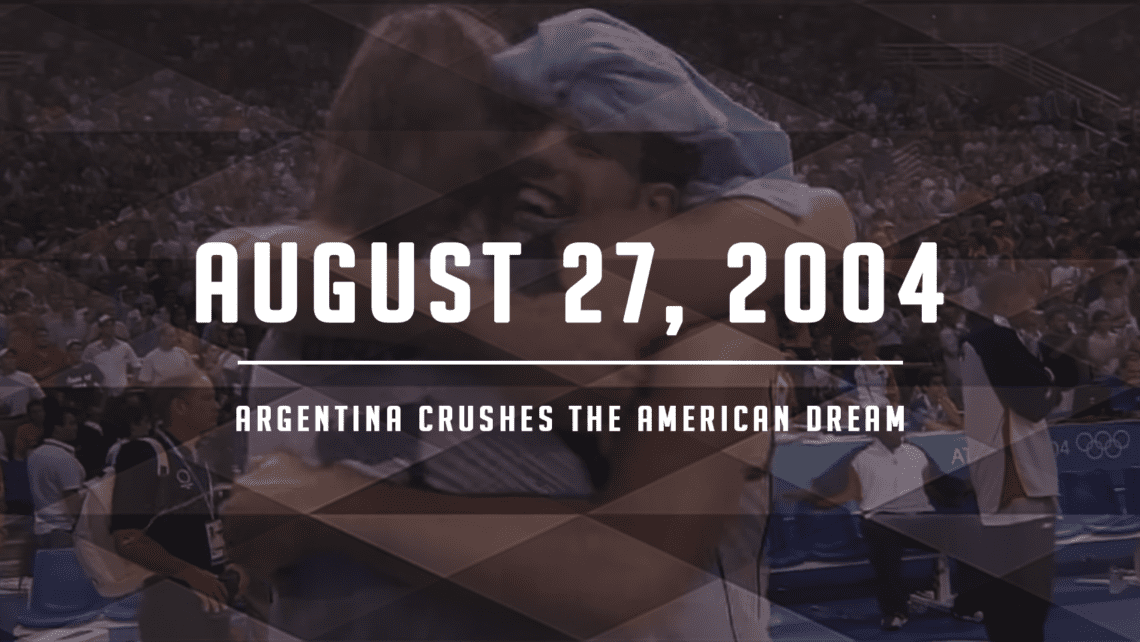 by Justin Meyer
in International, This Day in History

In the semifinals of the men’s basketball competition at the 2004 Athens Olympics, Argentina defeated the Americans, 89-81, snapping a three-straight golds for Team USA, the first time the team didn’t assert international supremacy since 1988.

Manu Ginoboli had himself a night, dominating with a game-high 29 points against a Team USA that included his long-time San Antonio Spurs teammate Tim Duncan. Andres Nocioni, Alejandro Ariel Montecchia, Walter Herrmann and Luis Scola rounded out the rest of the double-figure scoring for the Argentinians.

“In 1992, the USA had the best players ever,” Ginoboli explained to the Associated Press after the game. “Here they are great players, too, but they are young and they never played internationally, so with different rules it’s a whole different thing. The rest of the world is getting better and the States isn’t bringing their best players.”

It was Team USA’s third loss of the Olympics, more defeats than the program had endured in all previous Olympics combined, heading into the 2004 edition with an all-time record of 109-2 in the premier international basketball competition.

“We fought as hard as we could,” Allen Iverson told the AP. “We couldn’t get it done for whatever reason. They were a better team than us.”

According to the AP, Iverson was right. The same Argentina team that beat the Americans in 2002, the first squad to topple a Team USA compromised of NBA professionals, was simply the better side.

“The Argentines were better passers, shooters and defenders than the Americans,” the AP’s recap of the game read. “They confronted them with a mixture of man-to-man and zone defenses, and confounded them with an assortment of back picks and deft passes that turned the start of the second half into a layup drill.”

The result meant the Americans could miss out on a medal, something that had never happened in all 14 of the previous Olympic competitions. Team USA would later play Lithuania in the Bronze Medal Final, a rematch of a group play showdown that the Lithuanians won, 94-90, one week prior.

The Americans would ultimately win bronze, conquering Lithuania, 104-96, to avoid missing the podium for the first time ever. It was only the third time Team USA has failed to win gold at the Olympics and the country’s second-ever bronze in men’s basketball.

Argentina played Italy for gold and cruised to victory, 84-69. It was the country’s first and only Olympic gold medal in men’s basketball, becoming only the fourth nation to ever accomplish the feat, joining the elite club with the United States, the Soviet Union and Yugoslavia.