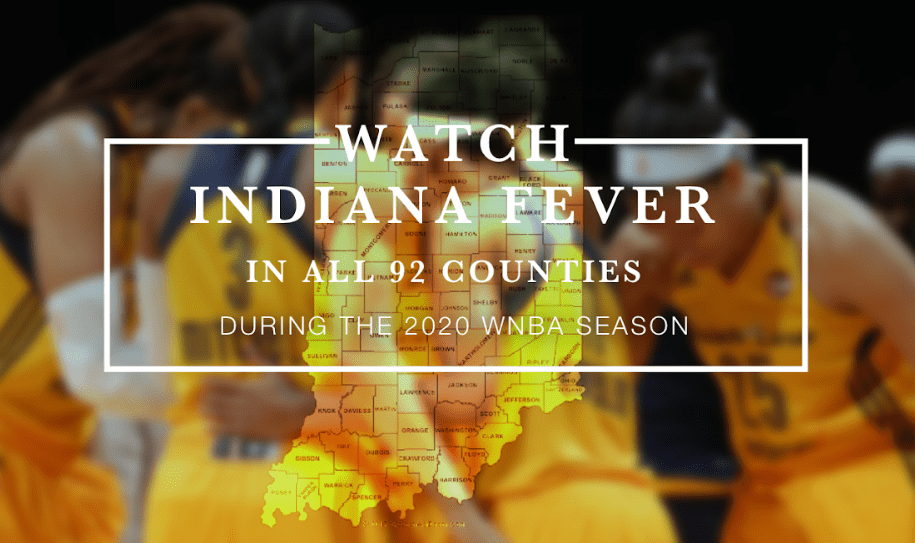 The 2020 WNBA season tips off Saturday, and streaming the Fever games will be available for free to all 92 Indiana counties.

The season is starting months after it was supposed to. You can thank coronavirus for that.

You can also thank the pandemic for the games being played at IMG Academy in front of zero fans, an unfortunate reality sports across the world are facing.

The Indiana Fever have provided their fans – and hopefully soon-to-be fans – with the next-best thing: free streams for the entire state.

On July 1, the team announced all Indiana residents will have free access to streams for all 22 of the Fever’s 22 regular season games. But it did so in a specific way, being sure to detail that all 92 Indiana counties will receive the rights. At the team’s virtual media day, Fever President and COO Dr. Allison Barber explained why that distinction was important to her and the franchise.

“I grew up in Northwest Indiana,” she said. “What I’ve learned from living in Northwester Indiana, you’re really disconnected from the rest of the state … I grew up with a keen awareness that different sections of Indiana have really different interests and connection points to the state.”

Northwest Indiana is heavily influenced by Chicago media, Barber said, and other parts of the state are similarly disconnected from Indianapolis. Simply stating the streaming would be available to all of Indiana wouldn’t drive home the same message the Fever are aiming to promote: the team is for all Hoosiers.

“All 92 counties demonstrates our intention of inspiring kids no matter where they are,” she said.

The current situation forcing all 12 WNBA teams into the affectionately-named “Wubble” has caused for some alterations to how the Fever and their 11 counterparts do business, from holding team dinners over Zoom to adjusting to basketball without fans in attendance. It brings some unique struggles, but also some unique opportunities. The Fever see this as one of those opportunities.

“We can’t bring any fans to the Fever, so we’re bringing the Fever to them,” Barber explained. “It’s about reaching everyone. We would be humbled and honored to have all Hoosiers, zip code to zip code, be fans of the Fever.”

It will be strange for all athletes in all sports to play without fans, and players will have to find the energy that comes from spectators elsewhere. General Manager Tamika Catchings, who played 15 seasons with the Fever and is one of the WNBA’s most prolific players, said it’ll be different for the players to ball without a crowd. Fortunately, they’ll have her to make up for it.

“I told them, I can cheer as loud as I can,” Catchings said. “We have our ball girls who will be at the games as well.”