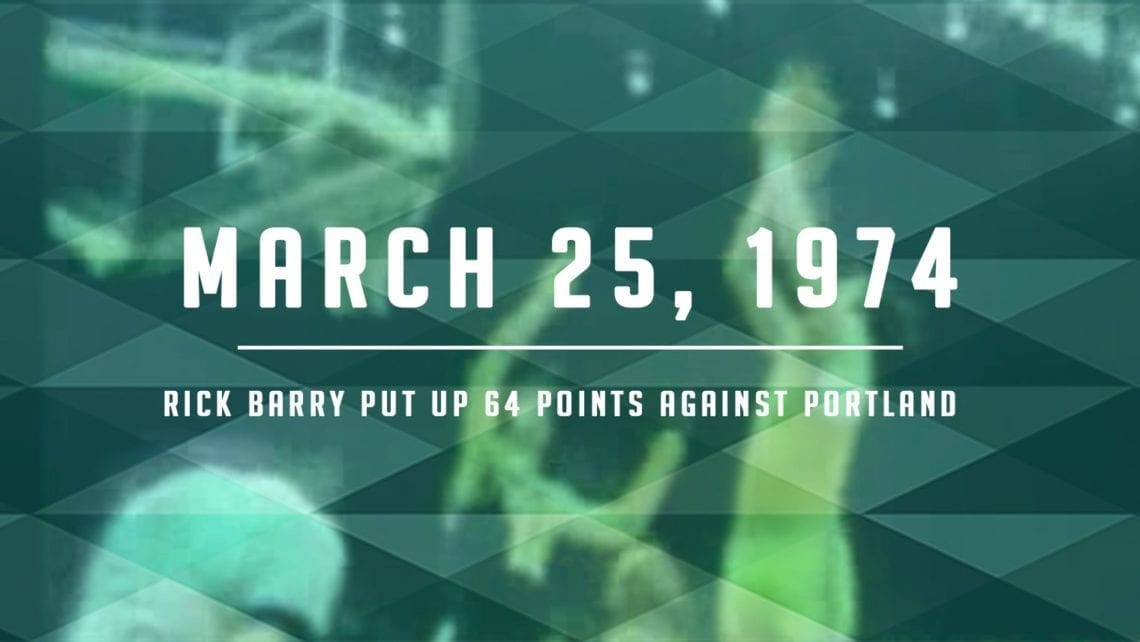 On this day 45 years ago, Rick Barry had one of the best scoring nights in the history of the NBA.

The Golden State forward scored 64 points in a 143-120 home win against Portland. He did so with only four free throws, shooting a ridiculous 66.7 percent from the field on 45 shots. If the scoring wasn’t enough, Barry added 10 rebounds, nine assists and five steals to round out his unforgettable night.

Barry became the third player in league history at the time to score 64 points in a game, joining Wilt Chamberlain and Elgin Baylor in the elite club. He and Chamberlain are the only two players to have ever made at least 30 field goals in an NBA game.

He started the game off well but not at a record-setting pace, notching 19 points in the first half in a typical good showing for the Hall of Famer. Barry took it to another level in the second half, scoring his other 45 points and hitting 21 field goals.

For the 1974 Warriors highlight film, Bill King, who did the radio broadcasting for the team at the time, summarized the player Barry had become.

“Rick Barry, once again the game’s most exciting player,” King said. “An unquestioned superstar, Barry possesses all the physical requirements for greatness, and he hasn’t misused them. As he plays his ninth pro season, Rick carries an added title and responsibility: captain of the Warriors as selected by his teammates. Nate Thurmond, his former teammates, has said, ‘Wherever Rick is, something’s going to happen. He’s just that kind of guy.’

“Rick came to the Warriors with that knack of explosiveness and controversy and amazing ability to find ways to score. Now at age 30, a totally rounded player, he’s one of the greatest forwards ever to play the game. A phenomenal scorer, underrated rebounds and the best playmaking forward in basketball. It was after the all-star break that Barry shifted into high-scoring gear. He went on a 41-game tear at a blazing pace of 28.5 points per game. Over the season, he tallied 30 points or more 31 times, 21 of those coming after the All Star Game. For the season, he was in the 40s seven times, the 50s twice, and on March 26, shattered Portland’s defense for his career high of 64. The impact of that performance falls into its true perspective with a glance at the NBA record book. Only Wilt Chamberlain and Elgin Baylor have ever scored more in a single game. Chamberlain did it 15 times.”

Rick Barry: The San Francisco Warriors drafted Barry second overall in the 1965 NBA Draft, and he played in the league for 15 years before retiring in 1980. He played for four teams in the ABA and NBA: two stints with the Warriors and one each with the Oakland Oaks/Washington Caps, New York Nets and Houston Rockets. He was inducted into the Hall of Fame in 1987 and is 67th on the all-time NBA scoring list. He won an NBA championship in 1975, an ABA championship in 1969 and was named to eight NBA All-Star Games, a few of the many accolades he earned during one of the best careers in basketball history.

1973-74 Golden State Warriors: Al Attles coached the team to a 44-38 regular season record, good for second in the Pacific Division, three games back of the Los Angeles Lakers for first. Its .537 winning percentage wasn’t enough to make the playoffs, finishing fifth in the Western Conference and eighth in the NBA. Barry was the team’s leading scorer with 25.1 points per game, one of six players to score in double figures. Forward Cazzie Russell was the team’s second-leading scorer with 20.5 points per contest.