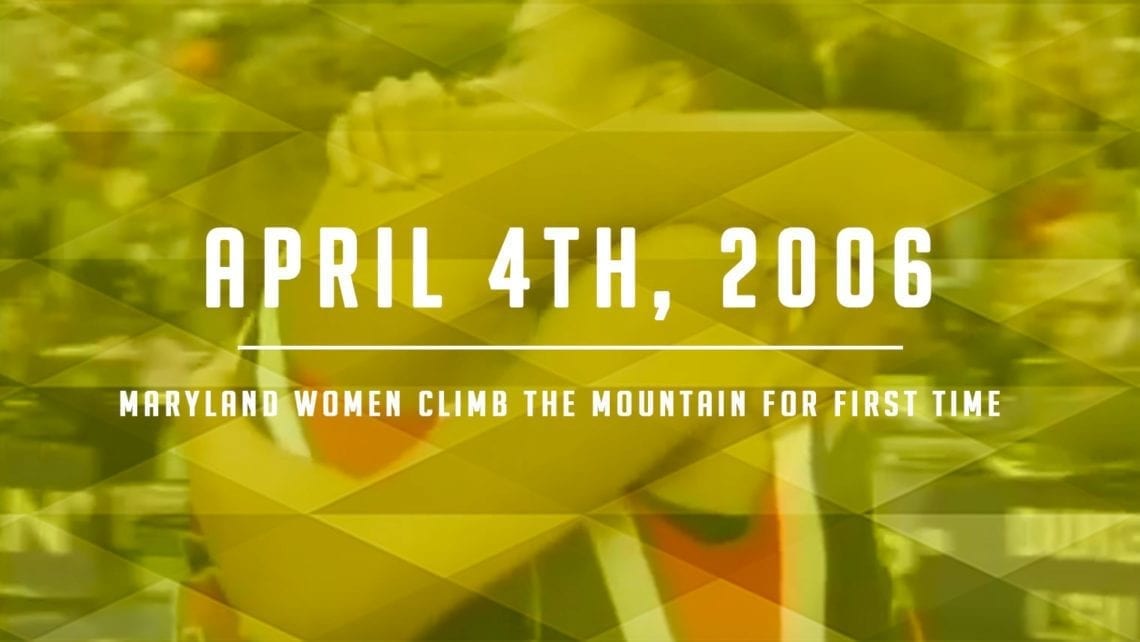 On this day 13 years ago, Maryland was atop women’s basketball.

The Terps came back from 13 points down, tying the second-largest comeback in NCAA Championship Game history at the time.

With 5:22 to play in regulation, Maryland took a 59-58 lead, its first since starting the game up 2-1, fully erasing the once double-digit deficit.

But Duke wouldn’t go away. The game was back and forth, with the Blue Devils climbing back in front in the game’s final minute, going to the line with 35 seconds remaining and a 68-65 lead.

Duke guard Abby Waner missed the front of a one-and-one that would have given her team a two possession lead. Maryland guard Kristi Toliver quickly stormed down the court and took a tough jumper spinning away from the basket, but like many of her difficult shots that night, it fell to bring Maryland within one with 25.1 seconds to go.

The Blue Devils made two free throws on the other end to bring the lead back to three. After a timeout, Toliver dribbled by two screens on the perimeter to set up a pull up triple right of the wing. With a hand in her face, she drilled another difficult shot with 6.1 ticks remaining to tie the game at 70. Those would be the final points of regulation, and the two ACC rivals would need an extra five points to square things in Boston.

“In my opinion, big-time players want the ball in big-time situations,” Toliver said after the game. “So I wanted to take the shot.”

Late in overtime, Toliver and forward Marissa Coleman sank two free throws each to solidify Maryland’s 78-75 lead with 13.4 seconds left. Duke forward Jessica Foley had a look from three in the final seconds to tie, but the shot grazed the front of the iron, and the Terps had their first national championship in program history.

Toliver, forward Laura Harper and guard Shay Doron scored 16 points each, tying for Maryland’s team-high in the game. Coleman finished with the double-double on 10 points and 14 rebounds, a dominant performance for the freshman.

Duke guard Monique Currie had a game-high 22 points on 7-of-16 shooting, and center Alison Bales had a double-double of her own, scoring 19 points, going 7-of-11 from the floor, and nabbed 12 boards.

2005-06 Maryland Terrapins: In head coach Brenda Frese’s fourth season at the helm in College Park, Maryland went 28-4 (12-2) and finished tied for second in the ACC with Duke. As the No. 3 seed in the ACC Tournament, the Terps made it to the title game, falling to regular season champion North Carolina.

The Terps earned the No. 2 seed in the Albuquerque Region, one of seven teams the ACC sent to the Big Dance. Maryland made easy work of No. 15 seed Sacred Heart in the first round, 95-54, then took care of No. 7 seed St. John’s in the second round, 84-71, and No. 3 seed Baylor in the Sweet 16, 82-63. No. 5 seed Utah posed a serious threat in the Elite Eight, forcing overtime, but the Terps prevailed, 75-65, to get back to the Final Four for the first time since 1989 and third time in program history. In the Final Four, Maryland faced a familiar foe: No. 1 seed North Carolina. But the Terps dispatched the Tar Heels, 81-70, and advanced to their first-ever national championship game. The overtime win against Duke in the season finale improved Maryland to 6-0 in overtime for the year.

Center Crystal Langhorne led the team in scoring and rebounding with 17.2 points and 8.6 rebounds per game. Coleman wasn’t far behind her, with 13.8 points and 8.1 rebounds per contest, also shooting 47 percent from three for the season. Toliver, the hero at the end of regulation in the championship game, added 11.6 points per outing and shot 40.4 percent from deep.

Duke was the No. 1 seed in the Bridgeport Region and cruised to the Elite Eight, conquering No. 16 seed Southern (96-27), No. 8 seed USC (85-51) and No. 4 seed Michigan State (86-61) before No. 2 seed Connecticut gave the Blue Devils a fight. It required overtime, but Duke prevailed over the Huskies, 63-61, for the program’s fourth Final Four and first trip back since 2003. The Blue Devils demolished No. 1 seed LSU, 64-45, in the national semifinals to get to their second-ever title game after getting there in 1999.

Currie was the team’s leading scorer at 16.4 points per game, adding 5.8 boards and 2.8 assists each contest to boot. Forward Mistie Williams and guard Lindsey Harding complemented her, chipping in 11.2 and 10.7 points per outing, respectively, with Williams leading her team in rebounding with an average of 6.3 per game. It was head coach Gail Goestenkors’s 14th season in charge at Duke.

2006 NCAA Tournament: Three ACC teams made the Final Four: Maryland, Duke and North Carolina, and LSU rounded out the rest of the national semifinals. It was Carolina’s second-ever Final Four and first since 1994 and LSU’s third-straight Final Four. The event was held at TD Garden in Boston, the home of the Boston Celtics and Boston Bruins.

The biggest upset of the tournament came in the second round when No. 8 seed Boston College defeated No. 1 seed Ohio State, 79-69, for a trip to the Sweet 16. Boston College would lose in the Sweet 16 to No. 5 seed Utah, 57-54, narrowly missing out on the program’s first-ever Elite Eight appearance. It was Utah’s first and only Elite Eight run in the team’s history.