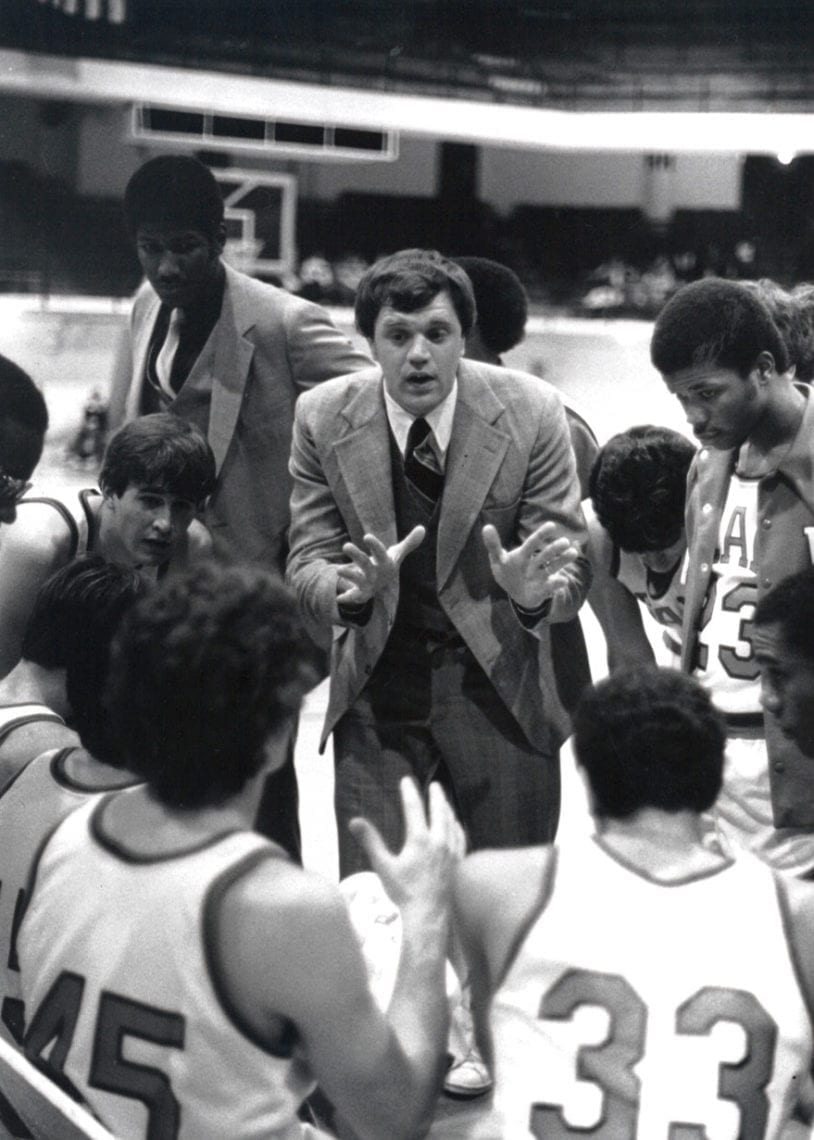 Before the championships, before the winning seasons, before the grandiose life lessons and before the revival of Washington University men’s basketball, Mark Edwards was just another tall kid in the Midwest who figured he might as well use his height for something.

When he was growing up in Peoria, Illinois, people would tell him he should play basketball because of his stature. In fifth grade, he accepted the challenge and tried out for his grade school’s team. It quickly became a passion.

Edwards continued with the sport into high school, attending and playing at Richwood High. The school had one of the best reputations in the state, and he fell in love with the balance of academics and athletics that would lay the foundation for his D-III deference.

“It was important to me that I found a place where I could do both,” Edwards recalled from when he was choosing a college. “I finally decided that Washington University was a place I could do both.”

Chuck Smith recruited him, selling Edwards on a school where he could achieve his dreams in both areas. But when Edwards arrived on campus in the fall of 1965, it wasn’t Smith who greeted him.

Smith left WashU that summer for the Central Missouri job, leaving Edwards with a new coach he had never met before: Bob Greenwood.

“Quite honestly, back then I didn’t know any difference,” Edwards explained. “I thought that’s how it happened. Nowadays of course everything would be in the papers and on social media, and everybody would know what was going on. I just came in and said, ‘Oh, okay, this is the way things are done.’”

Fortunately, the two built a connection, with Greenwood treating Edwards “like his first recruit.” The coach took a mentorship role, and the player was still just as thrilled to attend WashU and don its colors.

Edwards played out his college career at WashU, helping right the ship to recover from Smith’s departure. Following three-straight losing seasons his freshman through junior years, he played a role in completing the program’s first winning campaign since Smith left St. Louis.

After earning his undergraduate degree, Edwards hung around the program for the 1969-70 season as a grad assistant while working on a masters in psychology. The United States government had a different plan for him, though.

“This is back during the Vietnam era and in the middle of my graduate programs, deferments in the draft were eliminated, and I was drafted right out of graduate school into the Army,” he said. “I hadn’t finished my program. I had started work on my thesis, research for it, etcetera. I would have had to have started all over again when I got out. I wasn’t too excited about that.”

After leaving the Army in 1972, Edwards wasn’t sure what to do with his professional life. Restarting his masters wasn’t appealing, and basketball was all he had known. He got back in touch with his former coach, who was now at the helm at Washington State, and was invited to come to Pullman to help. Edwards took the gamble, packed his bags and went west in the middle of the season.

But another twist: roughly three weeks after his arrival, Greenwood was fired, and Edwards was stranded in eastern Washington with no idea what would come next.

Washington State Athletic Director Ray Nagel threw him a bone. He apologized for Edwards getting dragged all the way out there only for his coach to be fired, so he promised that if he helped smooth over the transition into the next regime, he would be sure he had a spot on the staff. Edwards agreed, and soon he was one of George Raveling’s underlings.

For nine years, Edwards coached under Raveling, a man with an extensive legacy in his own right. It was his first head coaching job, and at times both men learned the ropes together.

“I would have to say he’s my primary mentor,” Edwards said of Raveling. “He is one of the hardest working people I’ve ever known, and he’s also one of the most compassionate people I’ve ever known. He taught me a lot about how competitiveness and playing sport can be done both competitively and with compassion. In other words, you win with dignity, and I think this was an important part of my philosophy in coaching. You win the right way and for the right reasons.”

When both coaches started at Washington State, the program was on its way down. It also had John Wooden and the monster he had built in Westwood to compete with in the Pac-8, soon to be Pac-10. But within three seasons, Raveling, Edwards and company turning the Cougars into a winning team and put the program on the map, eventually getting to Washington State’s first NCAA Tournament appearance in nearly 40 years in 1980.

But Raveling’s compassion for his players is the number one thing Edwards said he will always remember from the time he spent on his staff.

“A number of years later, George gets a phone call from one of those players who had accused him of stuff, and he said he was applying for a job with Nike, which was a brand-new company back then, and George was an advisor with Nike when it first started. ‘They told me that if I can get a recommendation from you, they’d hire me.’ And you know what? George gave him one.”

Witnessing Raveling’s understanding of growth and forgiveness of mistakes was important in shaping Edwards into the head coach and program builder he became after leaving Washington State for WashU in 1981. He was keen to make clear he and Raveling differed on some things, but the baseline of Raveling’s principles have stayed with Edwards even now.

“The lessons that you learn, you have to apply them to your own life. It’s not like a person is going to give you a road map of what you have to do to be successful,” Edwards explained. “A mentor is simply going to give you somebody to look at and to examine and to come up with your own conclusions as to what it is that they do that makes them so successful.

Edwards spent nine years as an assistant under Raveling at Washington State before taking the head coaching position at his alma mater in 1981, reviving a program from scratch that has been canceled the same year he left for the Army. All that and more will be explained in the second part of our coverage of him.