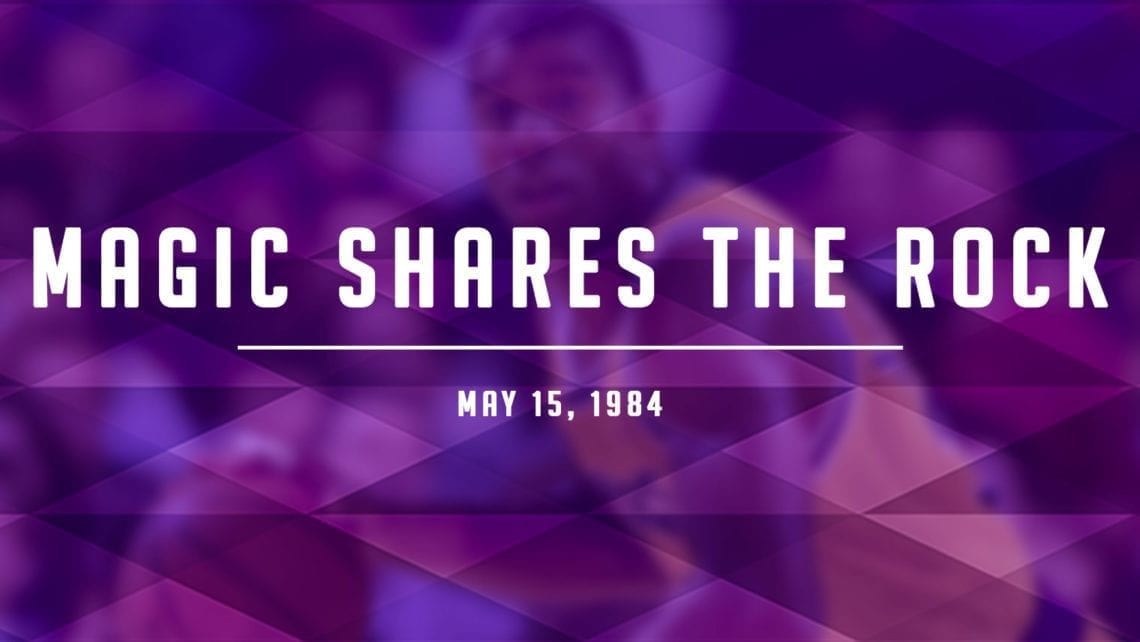 On this day 35 years ago, Magic Johnson set an NBA Playoffs record.

The Lakers entered Game 2 of the 1984 Western Conference Finals with a 1-0 lead over the Phoenix Suns. L.A. was aiming to represent the West in the NBA Finals for third-straight year and fourth time in five years. The Suns were hoping to return to the biggest stage for the first time since 1976.

Johnson’s performance in Game 2 certainly didn’t help Phoenix’s cause. He only scored a staggeringly low six points on 2-of-5 shooting, but that didn’t matter. What Johnson didn’t put on the scoreboard himself, he ensured his teammates did.

The guard posted 24 assists in his team’s 118-102 victory, a record for assists in an NBA Playoffs game.

He finished the game with a ridiculous 60.1 assist percentage, an estimate of the percentage of teammate field goals he assisted while on the floor. Johnson’s distribution helped seven Lakers score in double figures, headlined by Kareem Abdul-Jabbar (21 points, 10 rebounds), James Worthy (19 points) and Bob McAdoo (16 points).

The Lakers tallied 50 points on fast breaks and layups, a testament to the team’s defense and ability to move the ball.

“When we played Utah (in the Western Conference Semifinals), there would be maybe three guys on the break,” Phoenix guard Walter Davis told Anthony Cotton of Sports Illustrated. “Against (the Lakers), it’s always four, unless Kareem is out of the game. Then it’s five.”

1984 Western Conference Finals: After jumping out to a 2-0 lead, the Lakers traveled to Phoenix for Game 3. The Suns responded to the two early losses, taking the third game in overtime, 135-127, with 34 points from Walter Davis. The result led Tom Fitzpatrick, a columnist for The Arizona Republic, to assert the Lakers were overrated, specifically aiming his sights at Johnson and Abdul-Jabbar. Fitzgerald called Johnson’s shot selection “infantile,” and went on to state, “ridiculous pass attempts that would cause a player of lesser reputation to be recalled immediately to the bench.” For Abdul-Jabbar, Fitzgerald focused more on the 37-year-old’s “advanced” age, explaining, “what’s surprising is that he still is able to perform at all.”

“When you’re challenged like that, you can either meet it or back down from it,” Johnson said. “If you back down, you’re playing right into the other team’s hands. You’re in trouble when they see you can’t take it.”

Johnson made sure to make mention of Fitzgerald’s specific claims, too.

“I know I don’t play like no teenager,” he said.

Lakers head coach Pat Riley got in on the Fitzgerald bashing as well.

“Is Tom Fitzpatrick here?” he asked after Game 4. “You’re talking about two of the greatest players of all time, and for someone to take shots at them is incredible. I think they were a little motivated today.”

The Suns would win Game 5, 126-121, to bring the series back to Phoenix for Game 6, but it wouldn’t last longer than that. The Lakers took that matchup, 99-97, ending Phoenix’s season and giving L.A. a shot at redemption after losing the 1983 NBA Final to the Philadelphia 76ers in a 4-0 sweep.

1984 NBA Playoffs: In the West, the Lakers, Jazz and Portland Trail Blazers took the top three seeds, in order, with the Boston Celtics, Milwaukee Bucks and 76ers holding down the same positions in the East, respectively. In the first round, both No. 6 seeds knocked off the No. 3 seeds, with New Jersey and Phoenix upsetting Philadelphia and Portland, both by 3-2 series marks.

The Conference Semifinals went mostly as expected, with the No. 1 seed Lakers eliminating No. 4 seed Dallas, 4-1, No. 1 seed Boston defeating No. 5 seed New York Knicks, 4-3, and No. 2 seed Milwaukee dispatching of No. 6 seed New Jersey, 4-2. But the Suns pulled off another major upset, toppling No. 2 seed Utah, 4-2, to become the first No. 6 seed to make the Conference Finals since Houston did it in 1981.

The Western Conference Finals went L.A.’s way, 4-2, to send the Lakers back to the NBA Finals, where they had become near regulars during the last handful of years and end Phoenix’s Cinderella run. In the Eastern Conference Finals, the Celtics made quick work of the Bucks, winning 4-1 to get back to the NBA Finals for the first time since 1981, setting the stage for the first Celtics-Lakers championship in 15 years.

In seven tries in the late-1950s and 1960s, the Lakers franchise had never beat the Celtics in the NBA Finals. They nearly ended that drought in 1984, dragging the series to seven with wins in Game 1, Game 3 and Game 6. But the C’s won Game 7, 111-102, with 20 or more points from Cedric Maxwell, Dennis Johnson and Larry Bird. It was Boston’s 15th title and dropped the Lakers to 8-11 all-time in the NBA Finals.

In total, a player has tallied 20 or more assists in an NBA Playoffs game 20 times. Johnson is responsible for an astonishing 10 of them, with Stockton holding the next-most at four. Rajon Rondo has done it twice, with Nash, Doc Rivers and Tim Hardaway making up the players to reach the accomplishment once.