Home This Day in History 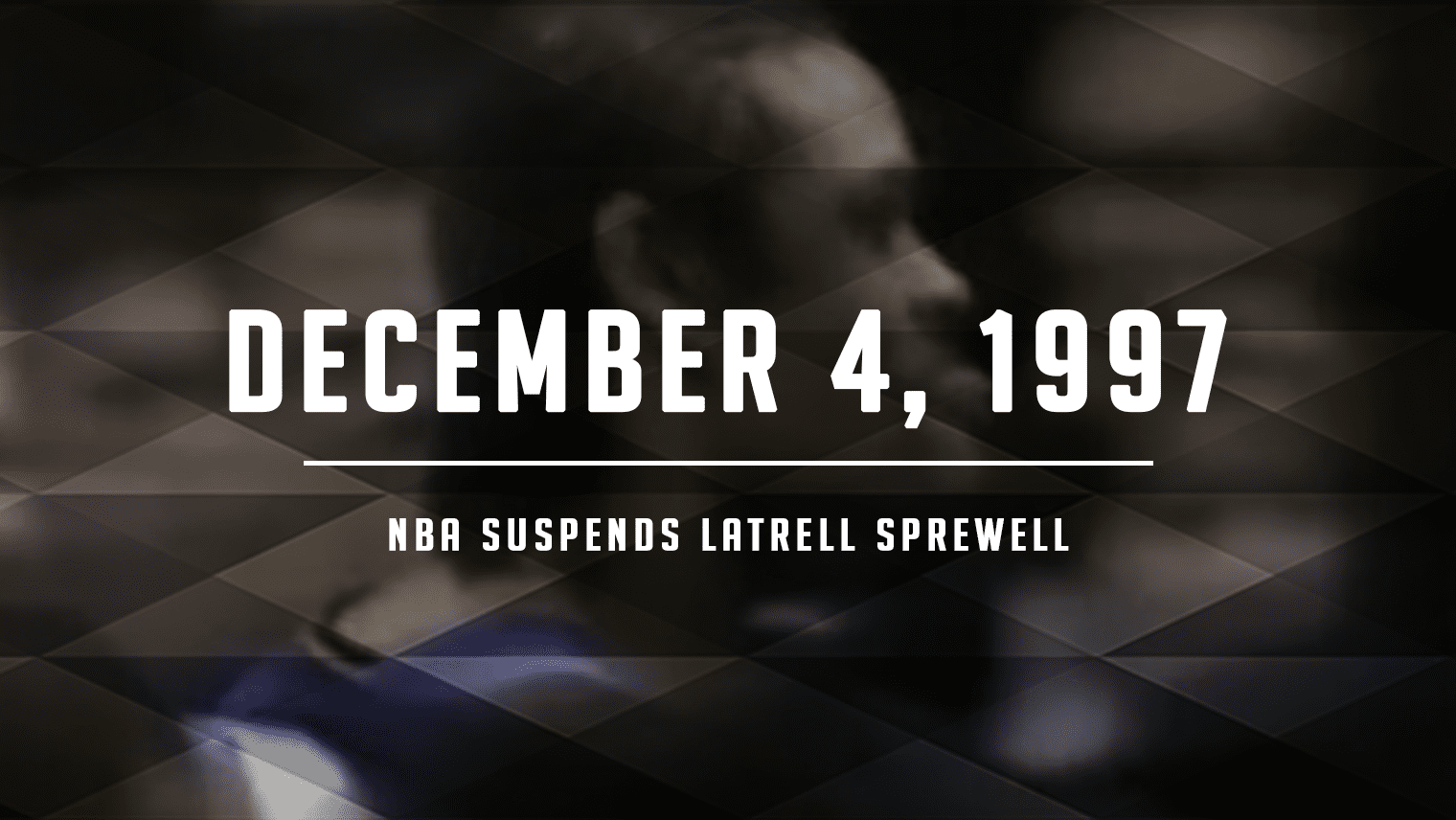 On this day 22 years ago, the NBA suspended Latrell Sprewell for one year for choking and assaulting his coach, P.J. Carlesimo, at practice.

by Justin Meyer
in This Day in History

On this day 22 years ago, the NBA suspended Latrell Sprewell for one year for attacking and choking his head coach, P.J. Carlesimo, in practice.

Sprewell had played in three All-Star Games as a member of the Golden State Warriors at that point in his career and was in the midst of his sixth season in the NBA. The team summarily canceled his contract and its remaining $23.7 million.

During practice on Dec. 1, Sprewell and Carlesimo got into an argument when the coach told his player to “put a little mustard” on a pass. Sprewell struck when Carlesimo approached, choking him until witnesses pulled him off. The team’s leading scorer was told to leave practice but returned 20 minutes later to take an extra swing at Carlesimo.

The attack left Carlesimo with a three-inch mark on his throat that was obvious in the subsequent press conference. Warriors general manager Garry St. Jean described the confrontation as “very, very serious.”

The two had a history of disagreements, with Carlesimo previously sitting Sprewell after he was late to practice. But Sprewell crossed just about every line there is by attacking him, and something much more severe had to be done.

“A sports league does not have to condone or accept behavior that would not be tolerated in any other segment of society,” NBA commissioner David Stern said. “Latrell Sprewell assaulted coach P.J. Carlesimo twice at Monday’s practice. First, he choked him until forcibly pulled away. Then, after leaving practice, Mr. Sprewell returned and fought his way through others to commit a second, and this time clearly premeditated, assault. Accordingly, Latrell Sprewell is suspended from the NBA for one year.”

Carlesimo did not file any charges and called the situation a team matter. But he was faced with a situation he had never figured he’d ever have to handle.

“You see a lot of things over the course of a career, and you prepare for a lot of different scenarios, but, no, no one expects something like this,” the coach said. “It happened, and we’re trying to deal with it.”

The Spin on Latrell Sprewell

Sprewell did not comment immediately after the alternation, but he was later quoted in the San Francisco Chronicle about what happened.

The guard told the Associated Press he will be okay no matter what the fallout brought.

“I’ll go overseas to play if I have to,” Sprewell explained. “And my life will go on if I never play basketball again. Basketball didn’t make me what I am. I’ll be OK. I’ll be man enough to deal with whatever happens.”

After Sprewell motioned for arbitration, his suspension was decreased to 68 games, which wound up depriving him of $6 million. He was traded to the New York Knicks after he was reinstated and restarted his NBA career in 1999 in the Big Apple.

Sprewell spent five seasons with the Knicks, averaging better than 16 points in each campaign and earning a spot in the 2001 All-Star Game, before the team dealt him to the Minnesota Timberwolves in July 2003, where he would spend the final two years of his career. After rejecting a three-year, $21 million contract extension offer from Minnesota, Sprewell effectively ended his time in the NBA. In all, he averaged 18.3 points, 4.0 assists and 4.1 rebounds in his 13 years in the league.