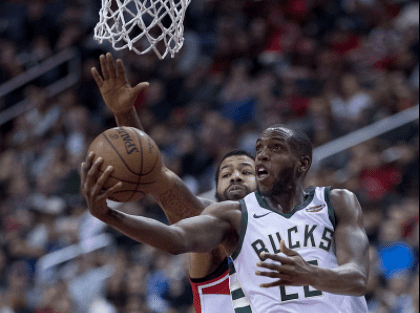 by Justin Meyer
in NBA, This Day in History

On this day eight years ago, Khris Middleton made his NBA debut.

The Detroit Pistons drafted Middleton with the No. 39 overall pick in the second round of the 2012 NBA Draft. The Texas A&M product from Charleston, South Carolina, played three years in college, leaving College Station after averaging 13.2 points, 2.3 assists and 5.0 rebounds per game as a junior.

After inactivating or choosing to not bring Middleton in for the first six games of the 2012-13 season, the Pistons brought one of their newest members of the team onto the court for the first time in the seventh matchup of the year against the Houston Rockets. Middleton played more than eight minutes, shooting 1-of-3 from the floor and sinking both free throw attempts to finish with four points and two steals in his first NBA appearance as the Rockets won, 96-82, and Detroit started its woeful start, remaining winless through its opening seven showdowns.

Middleton would make minor appearances in two of the team’s next four games, then in December was assigned to the D-League’s Fort Wayne Mad Ants. But he was brought back into the fold later in the season, resurfacing for a minor appearance Feb. 1, 2013, versus the Cleveland Cavaliers. It wasn’t until Feb. 22 when he was given serious time, though, playing for better than 23 minutes in a road date at the Indiana Pacers. He shot poorly from the field (1-of-7) but was effective from the charity stripe, finishing 7-of-9 for the day, and was given more opportunities following that 10-point performance.

On July 31, 2013, the Pistons sent Khris Middleton, Brandon Knight and Viacheslav Kravtsov to the Milwaukee Bucks in exchange for a sign-and-trade for Brandon Jennings.

Immediately, Middleton was given his chance with the Bucks. He played in all 82 games of the 2013-14 season and started in 64. By the end of the campaign, he was solidified as an important part of the Milwaukee rotation, posting 12.1 points, 2.1 assists, 3.8 rebounds and 1.0 steals per game averages.

It took a few more years for Middleton to truly explode in the NBA, starting all 82 regular season games for the first time in his career in 2017-18 and putting up better than 20 points per outing, then earning back-to-back NBA All-Star nods in the 2018-19 and 2019-20 seasons. He just finished his second season scoring more than 20 points per game and seventh-straight campaign posting double-digit scoring averages. Now 29, Middleton has been an integral piece in Milwaukee’s ascension toward the top of the NBA.