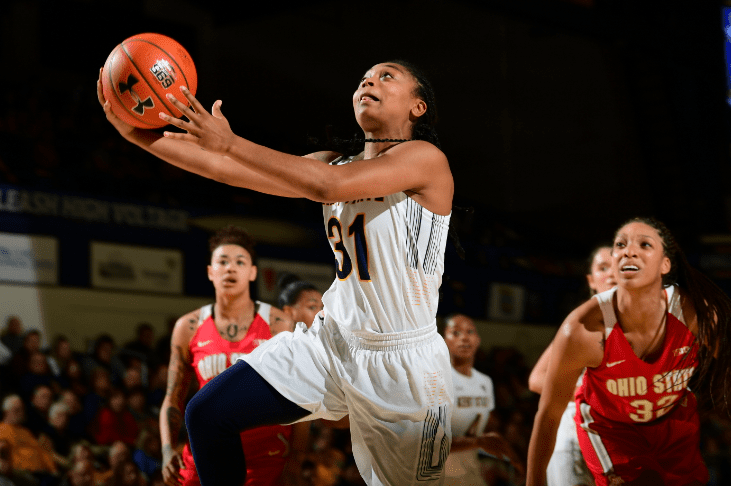 Kent State guard Megan Carter has played the cello since sixth grade and uses it as her escape from the stress of being a major college athlete. Photo credit to David Dermer.

by Justin Meyer
in College

Basketball is a passion for those playing at the collegiate level, and it consumes a great chunk of time. Combine training, games and travel with the responsibilities of being a student, and the spare time shrivels.

How does one calm down in the hyper-intense world of major college athletics? Everyone is different, but for Kent State’s Megan Carter, her escape is through strings.

The redshirt senior guard from Farmington Hills, Michigan, has played the cello since sixth grade. Her plan wasn’t originally to learn the cello; Carter had her sights set on the violin to hopefully help her with the guitar later, but her teacher urged her toward the cello or bass for number purposes. She took one look at the cello and made up her mind.

“I just laid eyes on the cello, and I was like, ‘I wanna play that,’” Carter recalled.

She started the instrument a year after the rest of her school’s orchestra, and for the first month, she admitted she was lost. But Carter got a hang of it quickly and fell in love.

Music is long running in the Carter family, and it’s no surprise to her that she found a side of it that spoke to her. She said her dad’s side of the family is full of singers, particularly her grandmother and great-grandmother. Of Carter’s five older brothers, four have pipes and one is a professional producer, singer and songwriter. The main genre of the family is gospel, and three of her siblings have a group together called The Carter Brothers, and all five play a varying array of instruments to boot.

“Our musical inkling is very, very high, and we all have an ear for music and love for music,” she explained. “I think that will continue through our own kids like that. It’s a huge, huge, huge part of our lives.”

Growing up in the Carter household, you had to love music. Otherwise, you better invest in earplugs.

“There was always, always, always music playing at all times,” Carter said of her home as a child. “The only time music wasn’t playing was at dinner time. Then, after everybody was done with dinner, the tunes came back on.”

Her teammates have been known to tease some singing out of her, but the cello is the true musical centerpiece for Carter. Since high school and becoming a college athlete, she hasn’t played much in anything organized. Nowadays, most of her cello playing is kept to herself in her apartment.

Carter carves out time in her schedule to ensure she has time alone with her instrument, which sleeps in its room, the hallway closet, when they aren’t hanging out. It has become her distraction when basketball, school or life bring stress and strife.

“When basketball is not particularly going my way, I look at that as my number two go to,” Carter said. “If I want to relax and stay in the house, then I’ll break out the cello and play a couple tunes to ease my mind. I’ll play whatever comes to me, or I’ll play a song. It’s just become a huge part of my life and what I do almost every day.”

Unsurprisingly, she is the only one in the Kent State program who owns a cello. They haven’t heard Carter play before as she prefers to keep the cello to herself, but they certainly do enjoy cracking jokes about it.

“I’ll be walking around with my headphones, and they’ll be like, ‘I bet you’re playing Mozart,’” she explained with a laugh.

The guard has a wide taste in music, but sometimes her teammates are right. She prefers to listen to classical music in the car, and her favorite song lately, The Elegy by Pyotr Tchaikovsky, fits the genre.

“I played that song in high school for a concert as a part of the orchestra,” Carter said. “The first time I heard the song, I was in awe. It’s so beautiful to me. I just love it. Ever since we played it in high school, I never got it out of my head. I just picked up recently again and started listening to it pretty heavy.”

Carter’s love for the cello, and music as a whole, brings out a different side of her, she said, and as much as she loves basketball, she appreciates being known for something else, too.

“My entire life has been wrapped in the identity of basketball, and it’s kind of refreshing to know that ‘good’ at something else,” she reflected. “My whole life doesn’t revolve around basketball. Basketball is not my identity. So, I think that goes a long way with me personally with people knowing, ‘Oh, she’s not just a basketball player, she’s a cellist, too, and not only that, she’s good at it.’”

She predicted that the cello will remain around for the rest of her time as the soothing step away from whatever ails her, a musical meditation that lets Carter thrive.

“If you need me for a wedding or special event, you can book me, no problem,” Carter half-joked. “But I think for the most part, it’ll just be my get away, my sacred place to go when I feel I need ot go there. It’ll always be a part of my life moving forward.”