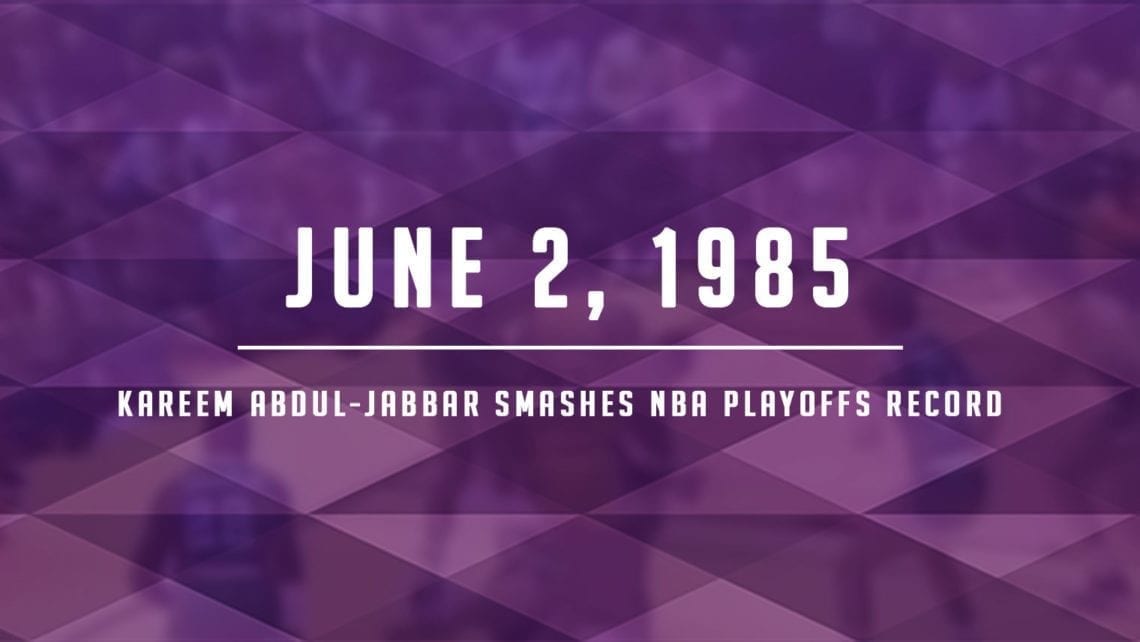 by Justin Meyer
in Insider, NBA, This Day in History

On this day 34 years ago, Kareem Abdul-Jabbar became the all-time leading scorer in NBA playoff history.

In the third quarter of Game 3 in the 1985 NBA Finals, the Lakers held a slim lead over Boston. Los Angeles needed a bucket to respond to a Larry Bird pull-up jumper in transition that cut the deficit to four, 71-67.

Off a possession that was kept alive with an Abdul-Jabbar offensive rebound, the center caught the ball on the block and spun baseline into his patented sky hook. The rock rattled down, and Abdul-Jabbar had made history.

Those two points gave him 4,458 career points in the NBA Playoffs, breaking the record previously set by Jerry West, coincidentally the Lakers GM at the time.

“There it is!” exclaimed Dick Stockton, the play-by-play announcer for CBS on the call. “Twenty points for Kareem Abdul-Jabbar, and he has established an NBA playoff scoring record.”

Abdul-Jabbar would finish with 26 points on the night in his team’s 136-111 win over the Celtics to take a 2-1 lead in the series.

The Hall of Famer ended his career with 5,762 playoff points in 237 games over 18 appearances.

His mark would stand until Michael Jordan broke it in the 1998 NBA Playoffs. LeBron James eclipsed Jordan’s 5,987-point mark in the 2017 NBA Playoffs, and Abdul-Jabbar remains third all-time in playoff scoring.

In an essay in The Guardian in March, Abdul-Jabbar wrote how he feels to see his records broken.

“Every time I’m introduced in a public setting, my list of NBA records is announced,” he said. “There aren’t as many as there were when I retired, so at least my introduction takes less time. But whenever someone closes in on one of my remaining records, especially the Moby-Dick as the all-time leading scorer, I’m asked by dozens of media people whether I think they can do it and how I’ll feel if they do.

“It’s as if people think I’m sitting home watching the games chanting: Miss! Miss! Miss! Actually, when I see these talented veteran players’ remarkable athleticism while shooting, blocking and rebounding, I’m cheering them on with ‘Go, man, go!’ … I want them to break my records because doing so is one more benchmark of human progress.”

1985 NBA Playoffs: The Celtics finished with the league’s best record in the regular season, their 63-19 mark one game better than the Lakers. In the East, the Milwaukee Bucks and Philadelphia 76ers entered the postseason as the No. 2 and No. 3 seeds, respectively, and posed the greatest threats to Boston’s quest for a second-straight Eastern Conference Championship. In the West, the Lakers were massive favorites, but the other top teams were No. 2 seed Denver Nuggets and No. 3 seed Houston Rockets.

All but two first-round series saw the top seed advance. Both exceptions were in the West, with No. 6 seed Utah Jazz knocked out the Rockets, 3-2, and No. 5 seed Portland Trail Blazers topped No. 4 seed Dallas Mavericks, 3-1.

The top two seeds in the West made easy work of their foes, both the Lakers and Nuggets dispatching the Trail Blazers and Jazz in five games. In the East, the 76ers swept the Bucks, keeping alive the dream of a second NBA title in three years, and Boston eventually got by Detroit in six games.

The Lakers and Celtics had minimal issues with the Nuggets and 76ers in the conference finals, figuring out both in five games. Byron Scott led Los Angeles in scoring with 23.4 points per game in the series, and Abdul-Jabbar averaged 20.0 points, 7.6 rebounds and 1.8 blocks per contest. Kevin McHale and Robert Parish controlled the paint for Boston in the Eastern Conference Finals, collectively posting 38.6 points and 24.2 boards per outing.

1985 NBA Finals: It was the eight time the Lakers and Celtics had met in the NBA Finals and the second season in a row the championship had come down to the two historic rivals. To that point, Boston had never lost in the Finals to the Lakers, and Los Angeles was looking to exercise the demons of 1984 and all the other losses decades before.

Boston jumped out to an early series lead with a 148-114 Game 1 victory, but the Lakers responded, defeating the Celtics 109-102 with 30 points and 17 rebounds from Abdul-Jabbar. Los Angeles kept the momentum going into Game 3 as its center broke the playoff scoring record to go up 2-1 in the series.

But Boston wouldn’t go away. With the shot clock running down and 35 seconds to go in a tie game, Danny Ainge fired a deep two-point jumper and drilled it, giving his Celtics a 105-103 edge with 33 ticks to go. Magic Johnson made a put-back to knot it at 105 with 19 seconds remaining. But a Larry Bird drive and dish to a wide open Dennis Johnson gave the Celtics a look at the buzzer, and he made it count, bringing the series to 2-2 going back to Boston.

In Game 5, James Worthy, Magic Johnson and Abdul-Jabbar combined for 95 points in LA’s 120-111 win, spitting Dennis Johnson and Kevin McHale’s double-doubles. Then, in Game 6, despite getting killed on the boards 54-44 and 32 McHale points, the Lakers found enough to defeat Boston, 111-100, to win their first championship since 1982 and ninth in franchise history.