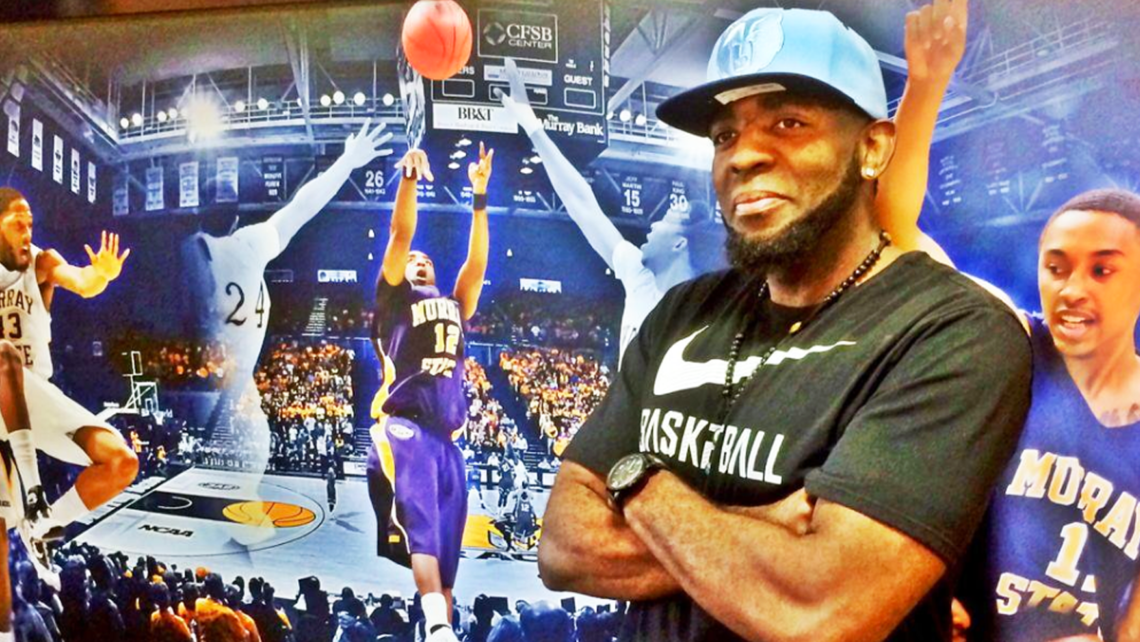 by Justin Meyer
in College, Legends

Before banging a Big Dance buzzer beater and before building a life across the Atlantic, Danero Thomas had a different adjustment to make.

In high school, the guard played for the New Orleans Jazz, a familiarly named AAU club in his hometown. On one of the team’s road trips, Thomas played particularly well during a stop in North Carolina. He caught the eye of a local prep school coach, who introduced himself to Thomas and opened the player’s eye to the prep world.

“I never heard of it at the time,” Thomas said. “I didn’t really know anything about it. I just gave it a shot.”

He called the number on the card the coach left him, and he flew out for a visit on the company’s dime. Thomas didn’t board a return flight. His mother shipped him his clothes, and he began a new life at Durham’s Mount Zion Christian Academy.

His college selection was even more abrupt.

Thomas was originally committed to Miami after building a relationship with assistant coach Billy Kennedy. When Kennedy left the Hurricanes to become the new head coach at Murray State, he gave Thomas a choice: remain with the Canes or fill his last open scholarship.

“I wound up going to Murray State, man, and I didn’t even take a visit,” Thomas said. “I just walked on campus.”

He made his impact quickly. He had a consistent role as a freshman in the 2006-07 season, and by the time he was a sophomore, Thomas already led the Racers in scoring.

But it wouldn’t be until his senior year that Thomas would have a chance in the Big Dance. He averaged 10.1 points per game as Murray State went 31-5 (17-1) in the regular season and marched through the OVC Tournament to secure an automatic bid, the program’s first since 2006.

“I was sitting in my room, just realizing that we’re about to be dancing for the first time in all my college career,” he recalled of his night on Selection Sunday 2010. “Me and two of my teammates, Tony Easley and Georges Fotso, we sat there and probably talked for two hours about it, just trying to make sure everybody was on the same page. We really took it serious, and I think people realized that after seeing us play that first game.”

The Racers were given the No. 13 seed in the West, paired with No. 4 seed Vanderbilt in the first round in a game that would have one of the more unforgettable finishes of the decade.

A tight 39 minutes culminated in Vanderbilt’s Jermaine Beal going to the free-throw line with 12.7 seconds remaining with his team down one. Under national pressure, he made both, pulling the Commodores ahead, 65-64.

“I know Coach Kennedy drew up a play, but I went to our assistant coach, Amir (Adbur-Rahim), and I told him, ‘Man, I want the ball,’” Thomas remembered from the ensuing timeout. “But the play wasn’t drawn up for me. It was drawn up for Isaac Miles to try to make a play or try to make a play for somebody else. But me and Isaac, we always had a connection the whole two years we played together, and I said to him there, ‘I want the ball.’

“He was telling me, ‘Just go and get it.’ So, I followed Isaac, the angle he was going, and I was right in his eyesight. It had been happening the whole year my senior year with me and him, just him finding me in some kind of way. When I saw him get almost double teamed, I saw him looking dead at me.

“When I caught it after he threw it, I looked up and knew I only had enough time to take one or two dribbles. It was one defender coming from one angle, and then it was my guy who went to trap, so he was kind of off balance. I knew I could get a little separation from him and try to get it off.

“So, it was a quick reaction, and I just put it in. That shot I took, that area, I shot that shot so many times in practice every day for four years, so I was comfortable taking the shot. I just put it in, man. I put that thing in, and it was crazy after it went down. I couldn’t believe it. I raised my hand up and a couple seconds later all my teammates were landing on top of me saying, ‘Man, we did it! Man, we did it!’ So that was a great moment. That was special. That was very special.”

Murray State’s 66-65 victory was the program’s first tournament win since 1988 when the Racers defeated North Carolina State in the first round as a No. 14 seed. As you’d expect, Thomas’s shot has remained enshrined in Murray State lore almost a decade later.

Thomas said Murray, Kentucky, has designated him a day in March, appropriately acknowledging it as Danero Thomas Day, and that when fans post videos of the shot on his social media pages that day, he re-watches the play.

“That’s how I’ve been keeping up with it. It’s just crazy, man,” Thomas said. “It’s something to watch still after all these years.”

His wife, Fanney Thomas, whom he met in Iceland playing professionally after college, said the shot was one of the first things he told her about when they first met.

“I think he probably tells me about it every other month since we started dating,” she laughed. “He doesn’t get tired of watching it. He’ll show it to me like I’ve never seen it before.”

Read the second article in this series now! It focuses on how Danero and Fanney Thomas met, the role basketball plays in their relationship, their respective professional careers and more. All photos shared by Danero Thomas.