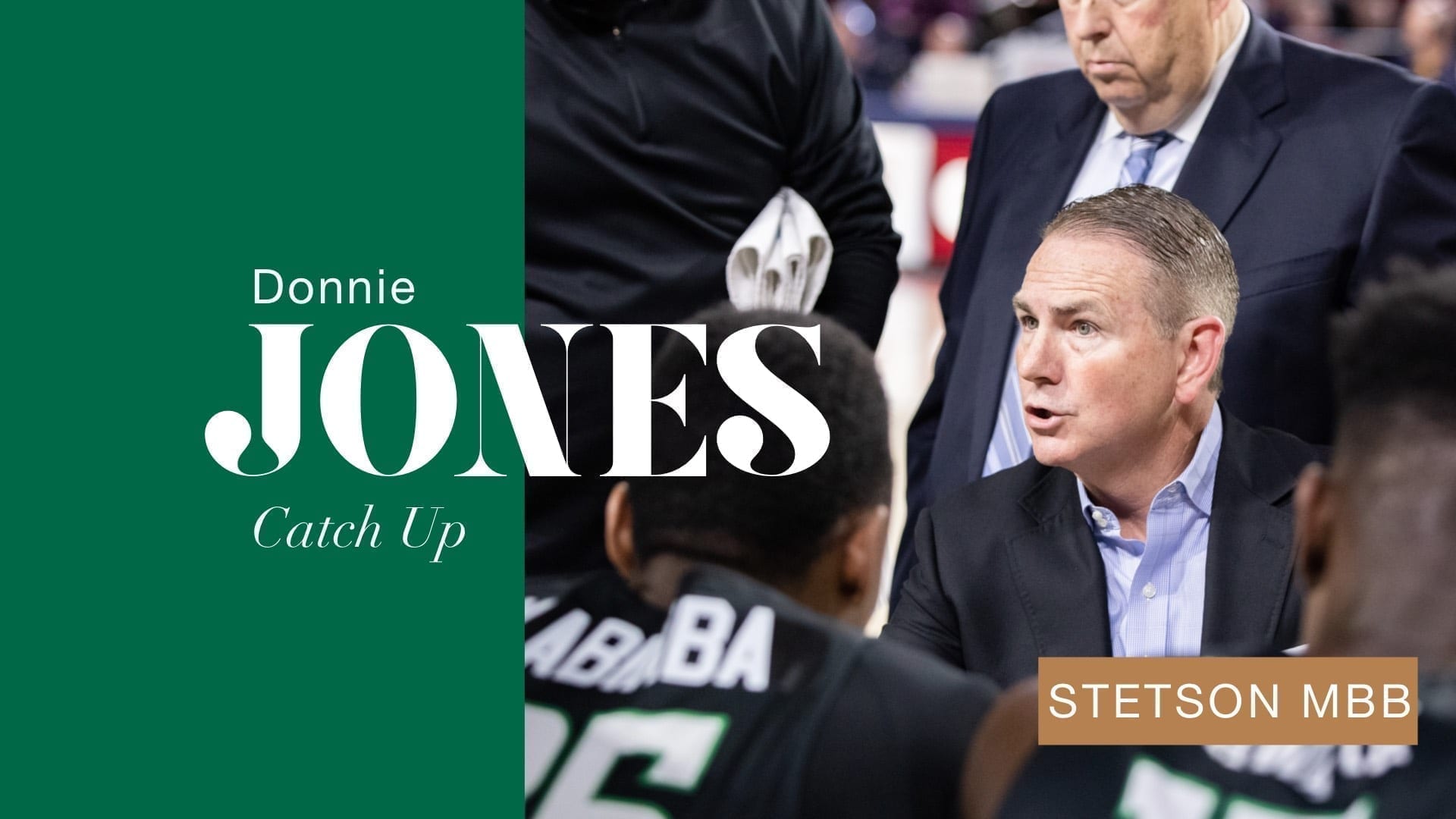 Nothing But Nylon has featured Stetson and its head men’s basketball coach, Donnie Jones all week long, from explaining how he ended up with the Hatters to his favorite podcasts and books and more. Now that the week has come to an end, we’ve collected all the content and put it neatly into one spot for you.

In our first post of the week, we explained why Stetson was the only job Jones pursued in 2019 and why coming back to the state of Florida was perfect for him and his family.

“There were a lot of jobs I didn’t want. There were a lot of jobs I never tried to get,” Donnie Jones said. “I was happy staying (at Dayton), knew we had a great program that was Final Four-good the next year, as you can see what they’ve done, and I wasn’t in no hurry. I was tired of moving, and if I was going to move, it was going to be something I really felt I fit.”

The 2019-20 campaign was Jones’ first in DeLand, and he had the Hatters performing much better than before he arrived. It was only the start of the transition to success he plans to bring to the program, but it was a definite step in a positive direction.

“(We’re) about where I want to be. I like where we’re heading is probably a better term,” Donnie Jones said. “Any time you get young guys, there’s inconsistency, and we’re not consistent enough. We had eight new players, and I’m bringing in six more. I think I like the steps we’re taking, but we got plenty of them to still take. You just don’t change a culture around. You can bring some life into it, which we did, but we know that for us to have a good team or good season, we want to be competitive like we were at Florida over the years, where we walk in, we build it, and it’s equipped to last.

How Florida Rose to Power in New Millenium

Before Billy Donovan came to Florida from Marshall in 1996, the Gators had experienced four 20-win seasons in almost 30 years. By 2007, Florida had been to nine NCAA Tournaments, four Sweet 16s, three Finals Fours and won back-to-back national championships with Donovan at the helm.

Donnie Jones came to Gainesville with Donovan in 1996, and he remained through the titles. He described how Donovan, himself and the rest of the program built the Gators into a national powerhouse.

“It took us a couple of years to establish ourselves, because we were new,” Jones explained. “We didn’t know what fit there, what won there. It took us a little bit of time to go through the process. It wasn’t a basketball school, so we didn’t walk in with a lot of talent. In going there, we had to develop people, and if you’re going to do it the right way, it takes time.

Podcasts, books and anything to expand his mind is central to how Donnie Jones operates his life. Education is forever to Jones, and he said it’s crucial to his coaching, too.

“Every day, my morning begins with that,” he said. “Podcast, reading, sharing, passing stuff on to other people to encourage, to grow. I’ve spoken on probably 15 or 20 webinars in these two weeks, and not many have been basketball, though some have.”

Our final piece covers Jones’ life in basketball from beginning to present, starting with growing up in Point Pleasant, West Virginia, and playing college ball at Pikeville College, now known as the University of Pikeville, and traversing through his entire career, which includes stints at Florida, Marshall, UCF and more.

“It was seven days a week, 14, 15 hours a day work, so I didn’t have a lot of time to be homesick and miss everybody. We were in the trenches. We were building a program,” he explained. “I spent every day with the guys I worked with, so those were unbelievable relationships. We all became the best of friends. We were very similar in age. Our lives were very similar. A lot of us didn’t have children yet, so were like college guys in a college job.”