Home A Decade Back 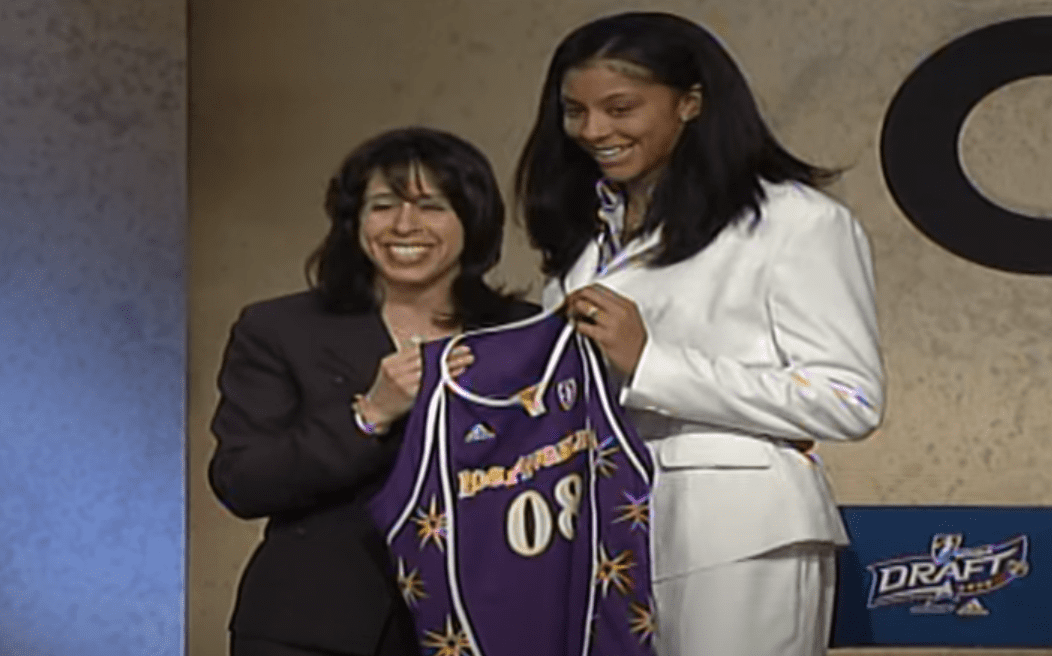 The Los Angeles Sparks selected Candace Parker with the No. 1 overall pick in the 2008 WNBA Draft. Let's look back at the reactions at the time.

Candace Parker Goes No. 1 to Sparks

by Justin Meyer
in A Decade Back, WNBA

Those plays were two of many she made during her college days, and they helped her reach the No. 1 spot in the 2008 WNBA Draft. On April 9, 2008, the Los Angeles Sparks made Parker the 12th top pick in WNBA history.

We’re a bit more than a decade on from that now. Parker is a veteran in the league, having played all 12 of her seasons with the Sparks, winning a championship in 2016, being named WNBA MVP twice (2008, 2013) and helping Team USA earn two gold medals in 2008 and 2012. In hindsight, the Sparks made a pretty good choice, but what were the reactions to their decision at the time?

Reactions to the Sparks Picking Candace Parker No. 1 in 2008

“Candace Park had a whirlwind 24 hours.

Parker was selected No. 1 by the Los Angeles Sparks in the WNBA Draft on Wednesday, a day after capping her college career by leading Tennessee to a second-straight NCAA title.

‘These last 15 hours or so have been just amazing,’ Parker said. ‘To win a national championship and then switch gears and come to the WNBA draft and be surrounded by my peers that I’ve played with ever since I was in junior high school has been amazing.'” – Associated Press

“I liken Candace Parker to when the Lakers acquired Kareem Abdul-Jabbar, and then in 1979, we acquired Magic Johnson, and then in 1983-84, we acquired James Worthy. But we got all three of those players in one, on one day, in one draft. Can you say, ‘show time’ in a different era?” – Michael Cooper, Los Angeles Sparks head coach

“LSU senior Sylvia Fowles was taken second by the Chicago Sky. The 6-6 center led the Lady Tigers to four straight Final Fours and scored 24 points and had 20 rebounds in their heartbreaking 47-46 semifinal loss this year to Tennessee.

Stanford star Candice Wiggins, whose team finished runner-up, went third to the Minnesota Lynx. Alexis Hornbuckle of Tennessee was chosen by Detroit and Matee Ajavon of Rutgers was selected by Houston, rounding out the top five.” – Associated Press

The 6-foot-4-inch forward was selected by the Los Angeles Sparks several hours after she helped the Lady Volunteers beat Stanford 64-48 in college basketball’s women’s title game in Tampa, Fla.

She will earn her degree on time this spring.

‘The last 15 hours have been the most amazing of my life (but) I was ready and it was time to move on.'” – UPI

Parker left Tennessee with a year of eligibility remaining. She chose to skip her fifth year, which she gained because of a knee injury as a freshman.

‘It’s been really hard,’ she said. ‘Obviously I’ve wavered. I think everybody wavers on decisions all the time. Especially when you’re in the moment and there’s orange surrounding you and people begging you and telling you one more year. But I gave my word, and I just felt it was time to go and we left on top.'” – Associated Press

“Let’s get this out of the way. If Candace Parker were a man, she’d be the most hyped professional basketball player ever. Bigger than anyone in this summer’s star-deficient NBA draft class.

Think about that for a second.

And if she were a man, you’d already know this and stories this would be unnecessary.

But Candace Parker is not a man and even in 2008 – 36 years since the inception of Title IX – the most dominant player in women’s college basketball and the No. 1 pick in Wednesday’s WNBA draft still needs and introduction.” – Percy Allen, Seattle Times

“She’ll add value to endemic sponsors who want to leverage her professional career for the sale of sport-inspired shoes and apparel. She’s a potential once-in-a-generation type of player. This is a gal who beat men in a slam-dunk contest when she was in high school. She’s got an urban-legend appeal … and she may have the ability to transcend her sport. She has the opportunity to be relevant to people whether they are WNBA fans or not.” – Paul Swangard, managing director of Oregon’s Warsaw Sports Marketing Center

“Aaron Goodwin, the agent who signed LeBron James and Sonics rookie Kevin Durant, looks as if he’ll skip the NBA draft this year and focus on Parker. Negotiations are expected to begin with Gatorade, Nike and Adidas.” – Allen

“The Associated Press player of the year joins Lisa Leslie on the Sparks, turning Los Angeles into one of the top teams in the league. The Sparks were a franchise-worst 10-24 last season with Leslie sitting out after giving birth to a daughter in June.

‘Lisa Leslie has been one of my idols ever since I was younger,’ Parker said. ‘I’ve never had an opportunity to play with her … but I’m really looking forward to it. Obviously, she’s a great role model and I’m looking to take in whatever she tells me.'” – Associated Press

“Well, draft day is over. I’m exhausted, I’m hungry, and I’m really excited to get out to LA and ball it out with Lisa Leslie and the Sparks. I’ll see you later.” – Parker