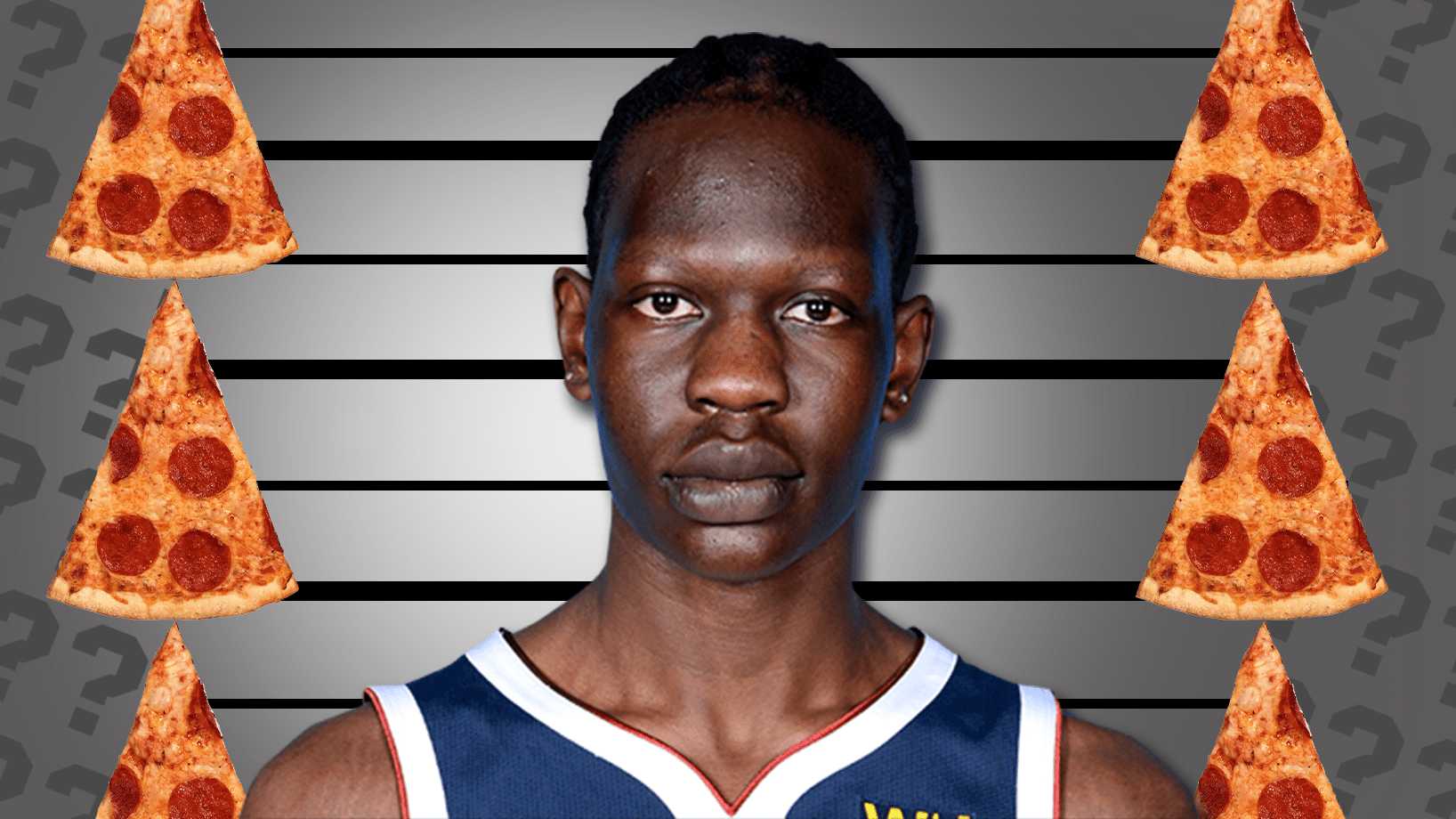 by Justin Meyer
in NBA, News

Editor’s Note: This is the kind of non-sense we are creating for ourselves, and for you, to stay sane during these dark, sport-less times. First person who crafts a Bol Bol sculpture 100% out of pizza will receive a prize pack courtesy of Nothing But Nylon beyond their wildest dreams. Pics or it didn’t happen.

Bol Bol has one of the best names of anyone who has ever lived. Add in that he is an towering, gangling creature who can handle the ball and shoot, defying the laws of everything we once thought we knew, and his existence further becomes a fascinating enigma.

He has shown great displays of personality, too. Perhaps nothing surpasses when he signed a bowl a fan eagerly waved in front of him as he walked to Oregon’s practice during its 2019 NCAA Tournament run, giving the world the indelible moment of when Bol Bol signed a bowl (bowl).

Unfortunately for Ducks fans and everyone who enjoys watching Bol Bol ball ball, his time in college was cut short after a foot injury in December 2018 sidelined him for the rest of the season. He left college early, going in the second round of the 2019 NBA Draft to the Miami Heat, who then dealt him to the Denver Nuggets. It has been an interesting first professional season for the player, spending his time in the G League with the Windy City Bulls. But he didn’t get to play much before injury struck again.

It was Dec. 14, 2019, the last time Bol Bol played in a game, and the question his injuries and potential have everyone asking is, how many slices of pizza tall is the Sudanese Swatter?

Bol Bol Measured in Carefully-Melted Cheese and Other Pizza Nutrients

According to NBA.com, Bol Bol stands at 7-feet-2-inches. This will be the official height we use in our calculations.

Now, determining the size of a pizza slice will be more difficult. Not all slices of pizza are the same, and there isn’t really a universal standard on their size. Naturally, the size of pizza you order will affect the size of the slices, not to mention that different styles of the food across America and beyond mean we’re not working with much uniformity here.

That’s why I’m putting my foot down and making an executive decision. Americans like food, and we like to eat a lot of it. The normal size for a large pizza in this country is 14 inches, and if you don’t think we should use the large as the standard for this exercise, then you’ve never been to America.

Your normal pizza is cut into eight even slices. If you take one slice from a 14-inch pizza and hold it upright with the crust on the ground and the crust facing directly up, it should stand 7 inches tall. This is assuming you cut your pizza precisely, and for science this important, we have to operate on that assumption.

After doing some difficult math, I have determined that Bol Bol is 86 inches tall. This means that Bol Bol is approximately 12.2857143 slices of pizza tall, if your slices come from a 14-inch slab of ‘za.

That number is liable to change if you use different slices, though. For example, if it’s only a 7-inch personal pizza that you’re using to measure the-man-so-nice-they-named-him-twice, then you’ll need to find way more slices. At that rate, Bol Bol comes in at 24.5714286 slices, a number I arrived at by multiplying the last one by two.

BUT WAIT! It gets deeper.

For those familiar with College Park, Maryland, in the mid-2010s, the name Pizza Mart provides you with a wash of senses, from the piercing shrieks of blacked out 20 year olds to the layers of grease seemingly covering everything. As a student at the University of Maryland from 2013 to 2017, Pizza Mart and their jumbo slices were impossible to ignore.

One jumbo slice, which would run you $5, was one-fourth of an extra-large pie, which at Pizza Mart was 32 inches. That means that if you stand up one of its slices vertically, it would stand 16 inches giant. Using my scientific equipment, I have concluded that Bol Bol is 5.375 jumbo slices of pizza tall, which would cost $26.88 cents (before taxes) if Pizza Mart were still open, but it’s not.

This is a truly groundbreaking discovery for the pizza and basketball communities, and I appreciate anyone who came along for the ride.

When Do the 2020-21 College Basketball Seasons Start?