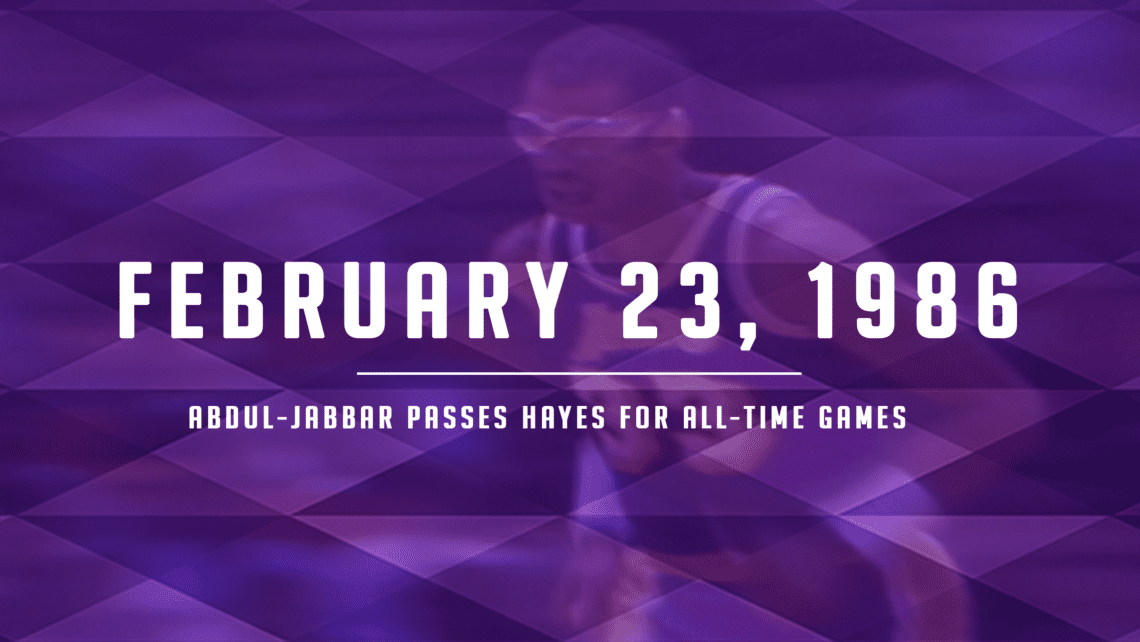 On this day 33 years ago, Kareem Abdul-Jabbar played in his 1,304th game, surpassing Elvin Hayes as the NBA’s all-time leader in games played and minutes. After 50,000 recorded minutes, Abdul-Jabbar took the crown followed by his Lakers topping Philadelphia 117-111 in overtime at The Spectrum. Another highlight performance from the future Hall of Famer featured 28 points and seven blocks from the record setter.

The superstar center played 1,560 total games before retiring in 1989, a mark that stood until April 6, 1996, when Robert Parish featured in his 1,561th game. Parish still holds the current record at 1,611 and Abdul-Jabbar remains in second.

1985-86 Los Angeles Lakers: The reigning champs from 1985, four-straight Western Conference titles and another finish atop the conference with a 62-20 record, the Lakers had their sights on a fourth title in seven years. Headlined by Abdul-Jabbar, Magic Johnson and James Worthy, they were the favorites to do so. The top seed cruised through San Antonio 3-0 in the first round before dispatching Dallas in the second round in six games to earn a Western Conference Finals with second-seeded Houston. Los Angeles took the first game 119-107 with 31 points from Abdul-Jabbar, but Hakeem Olajuwon took over the series from there. He scored 22, 40, 35 and 30 in Games 2 through 5, respectively, and averaged a double-double for the series. The Rockets ended the Lakers season on a buzzer-beating jumper from Ralph Sampson in Game 5 to win the series 4-1. Houston went on to lose the NBA Finals to Boston, 4-2.

Elvin Hayes: Also known as The Big E, Elvin Hayes played college ball at Houston from 1965-1968, averaging a double-double in all three seasons and helping lead the Cougars to their first and second-ever Final Fours in 1967 and 1968. After being selected first overall in the 1968 NBA Draft, Hayes played 16 seasons in the NBA for the Rockets (seven seasons) and Bullets (nine seasons) franchises. He never played fewer than 80 games in a season, appearing in all 82 regular season contests eight times. The 12-time All-Star (1969-80) won an NBA Championship in 1978 with the Washington Bullets through his legendary partnerships with Wes Unseld and Bob Dandridge.